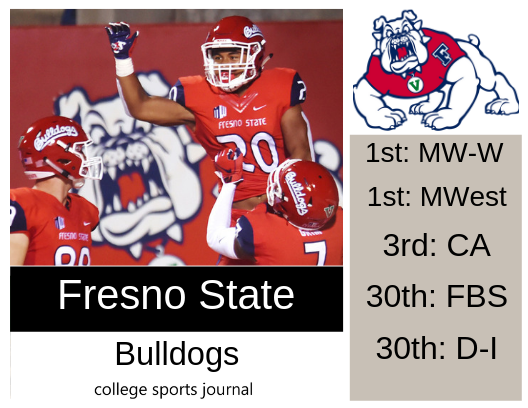 2018 In a Sentence: The Bulldogs won their third MWC championship since joining the league in 2012. Fresno State lost 24-17 to Boise State on the road during the regular season but the Bulldogs avenged their loss to the Broncos in the conference title game, earning a 19-16 win in overtime. The Bulldogs capped the season with a 31-20 win over Arizona State in the Las Vegas Bowl to finish 12-2 overall (7-1 MWC).

Biggest Shoes to Fill: WR KeeSean Johnson finished last year with 1,340 yards and eight touchdowns in a very prolific offense that also sees QB Marcus McMaryion also gone. The Fresno State offense ranked 47th in the FBS. Johnson was selected in the NFL Draft’s second round by the Arizona Cardinals.

Key Player: RB Ronnie Rivers is the top returning offensive threat after leading the team with 743 rushing yards and 10 touchdowns. With a new quarterback and receiving corps, Rivers will be key to keeping the pass of the offense.

Fearless Prediction: QB Jorge Reyna will be replacing McMaryion and will see fire right away with games against USC and Minnesota. While the Bulldogs might take their lumps early, the team will get its stride later in the season and be enough to win the MW West Division and will battle to win the league once again.