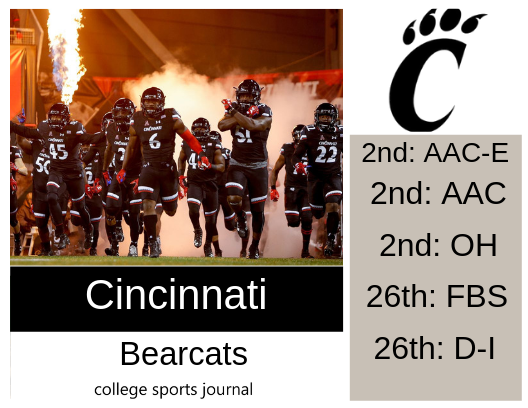 2018 In a Sentence: Cincinnati kicked off the season with a six-game win streak until an overtime loss to Temple snapped the hot start. But the Bearcats picked right back up by winning four of their final five games (with the other loss at UCF) and qualified for a first bowl game in three seasons. A win over Virginia Tech in the Military Bowl capped season with Cincinnati’s first bowl victory since 2012 and finished 11-2 overall (6-2 AAC).

Biggest Shoes to Fill: Defensive Linemen Cortez Broughton, Marquise Copeland and Kimoni Fitz were a force upfront last year for the Bearcats. The trio accounted for 33 tackles for a loss and 14 sacks on a defense that ranked in the Top 15 in all of FBS in just about all categories. Replacing that front line of defense will be a key for Cincinnati to repeat those kinds of numbers.

Key Player: RB Michael Warren II became Cincinnati’s first 1,000-yard rusher since 2012 (George Winn) after totaling 1,329 yards and a school-record 20 total touchdowns last season. He led the league in rushing attempts (244) and plays from scrimmage (269) while powering the Bearcats to one of their best rushing seasons in nearly four decades. The now-junior will have just two linemen in front of him back so he will have to get these number with a new offensive linemen. He will be helped with the support of the passing game with QB Desmond Ridder back after he finished with 2,445 passing yards and 572 rushing yards with 25 total touchdowns, earning him AAC Freshman of the Year honors a year ago.

Fearless Prediction: If the Bearcats hope to build off of last season, they’ll need the offense to pick up where it left off as the defense adapts to the loss of key contributors. The schedule is not real kind as it plays two P5 teams in hosting UCLA and traveling in-state to Ohio State so getting off to a fast start like it did last year may not be realistic with so many new starters. However, the Bearcats showed it can compete with the top teams in the AAC. It will likely see a game or two overall dropoff in the win total but will be right in the mix in the very tough AAC East Division but will fall just short of the division.