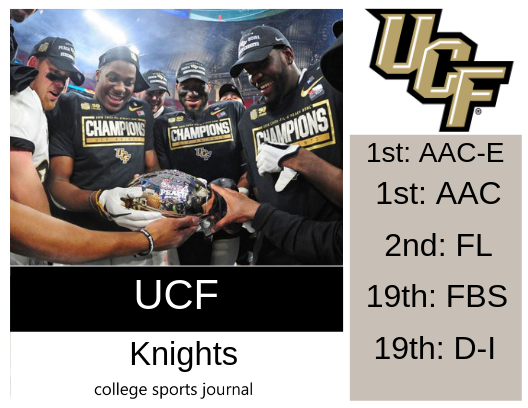 2018 In a Sentence: UCF picked up right where it left off in 2017 in Coach Heupel’s first year at the helm by storming through the regular season, extending its nation-leading win streak to 25 games. The streak included a pair of come-from-behind wins over Memphis (twice) and Temple, to claim the program’s second consecutive AAC championship but a Fiesta Bowl bowl loss to LSU ended the win streak for the Knights to finish 12-1 overall (8-0 AAC).

Biggest Shoes to Fill: QB McKenzie Milton (lost last season late in the regular season) was the two-time AAC Offensive Player of the Year will be out for the entire 2019 season as he continues to recover from a devastating knee injury that nearly cost him his right leg, the Knights have spent the past eight months searching for his replacement. A four-man competition among Darriel Mack, Brandon Wimbush, Quadry Jones and Dillon Gabriel has been reduced down to three after Mack suffered a broken ankle in July but could be back in mid-season. Key Players: RBs Greg McCrae and Adrian Killins will be keys to the Knight offense with the quarterback position in question. McCrae became the first UCF player to rush for at least 1,000 yards in a season since 2013 when he amassed more than 1,182 yards and 10 touchdowns. Killins was a very good back-up after amassing 715 yards and four touchdowns, The returning duo helped the Knights produce one of the top rushing offenses in the country. The team averaged more than 265 yards on the ground, the first time a UCF team averaged more than 200 rushing yards in more than a decade (2007).

Fearless Prediction: As was shown after the loss of Milton, UCF can still compete with teams like Memphis in the AAC title game and LSU in the Fiesta Bowl. The question mark at quarterback may not be too much of a question by the time mid-season comes around. UCF is still has experience on defense and still will have a powerful offense. It likely won’t go undefeated again on the regular season but still will be enough to the best team in the Group of Five and another New Year’s Six bowl bid.