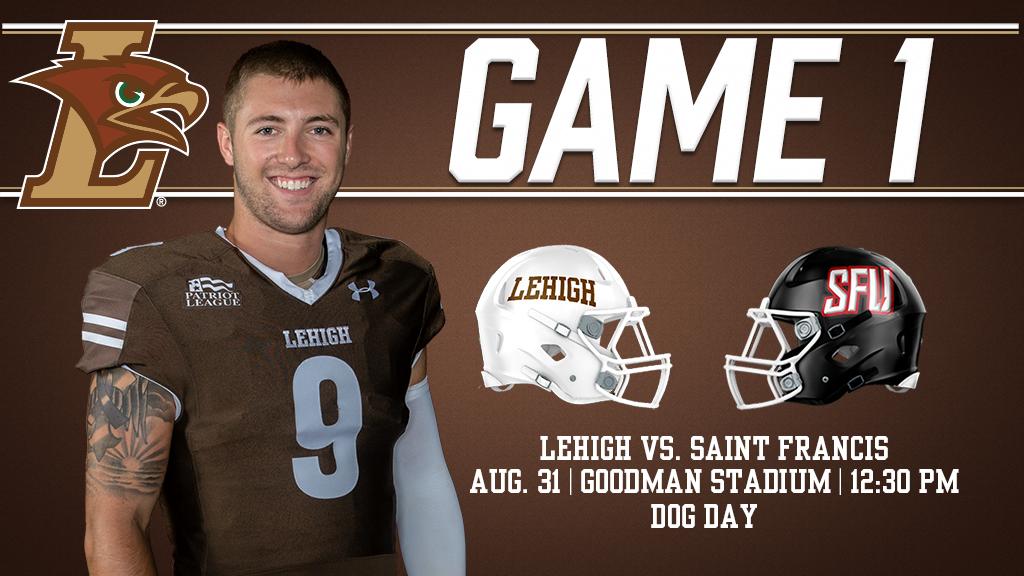 Lehigh has just released their game notes for their 2019 Week 1 tilt against St. Francis (PA), and it’s our first look at Lehigh’s starting two deep. Here are my five takeaways from the list.

1. Coaching staff are playing things close to the vest.

In a lot of ways, the way Lehigh’s camps and such under head coach Tom Gilmore have had a similar feel to the way they were under retired head coach Andy Coen, even if Gilmore added his own fire and enthusiasm to the proceedings. However, it’s here where there is a marked difference between the way coach Coen unveiled things and how coach Gilmore is unveiling things. In years past, Coen was in many ways an open book with his lineups and starters. Instead, Gilmore and his staff are playing things much less openly. It’s possible we might see some surprises on Saturday.

2. The official defensive formation is the 3-4.

It’s a bit of a shock to see no “Rover” on the actual depth chart on defense and instead see a 3-4 defensive front with two outside linebackers and two inside linebackers. The biggest news is that LB Riley O’Neil makes an official switch from defensive back/rover to a more formal outside linebacker position, joining LB Erik Slater, LB Keith Woetzel and LB Pete Haffner in that unit in the starting alignment. It remains to be seen how different O’Neil’s role is going to be in reality in a multiple 3-4, but that’s going to be something to watch on Saturday.

Up front, DE Davis Maxie shifts to a more typical DE role and sophomore NT Bartek Rybka slides over to become nose guard. Fifth year senior DE Juwan Morrow shifts to the other side of the defensive line as well. If they stay healthy, this could be one strong unit as well.

(Incidentally, I am an enormous fan of the multiple 3-4 defense, so this is an innovation I am very eager to see this Saturday.)

It perhaps isn’t a surprise that a team which has more than 40% of its roster as freshmen have some true freshmen on the two deep, but it’s still a shock to see ten true freshmen at the 2s on the depth chart and three sophomores on there who have yet to take a snap in game action. Especially with the switch to the 3-4 and O’Neil moving to linebacker, that seems to have opened up some spots for freshmen in the secondary with CB Brandon Spencer, CB Jack Bush and DB TyGee Leach with some real opportunity to get playing time.

On offense, some sophomores, WR De’Shun Mickens and RB Peter Lucas could possibly seem poised to get a decent amount of game time against St. Francis, as well as freshmen TE Ian O’Connor, and WR Jalen Burbage. A lot will depend on the availability of WR Austin Dambach, who going into camp was poised for a big role in the upcoming offense.

All summer the left side of the offensive line was basically set with OT Chris Fournier, team captain OG Nick Rosen, and C Justin Gurth. The questions came on the right side, where talented OT Alex Motley‘s availability was limited due to injury. Questions about whether he will be able to start alongside OG Matt Fest (who seems like he has played every single position on this Lehigh offense at one time or another) have been circling. If he’s unable to go, 6’5, 310 lb sophomore OT Jack Fris will take his place on the line.

5. There’s a feeling of confidence going into this game on offense.

Wins count for everything and feelings count for little, but from what I’ve been able to determine there’s a feeling that despite the youth of this team, things feel better on offense than they did at this time last year. On paper, having a starter at QB with a “half start” of game experience under his belt (QB Tyler Monaco) and the graduation of the programs’ most prolific rushing threat since Rabih Abdullah (RB Dom Bragalone) would be a cause for worry, but that’s not the case with this unit this season.

Monaco in particular has taken what could have been an open audition at quarterback and has worked his way into being the starter on Saturday, offering if nothing else stability thorough the spring and late summer practice. And sophomore RB Rashawn Allen has, as expected, stepped up to be the No. 1 RB, working with a surprising change of pace back in RB Peter Lucas as his backup. With senior WR Dev Bibbens and junior WR Jorge Portorreal at the X and Z, there’s still the potential of explosive offense there that was all too lacking last year. 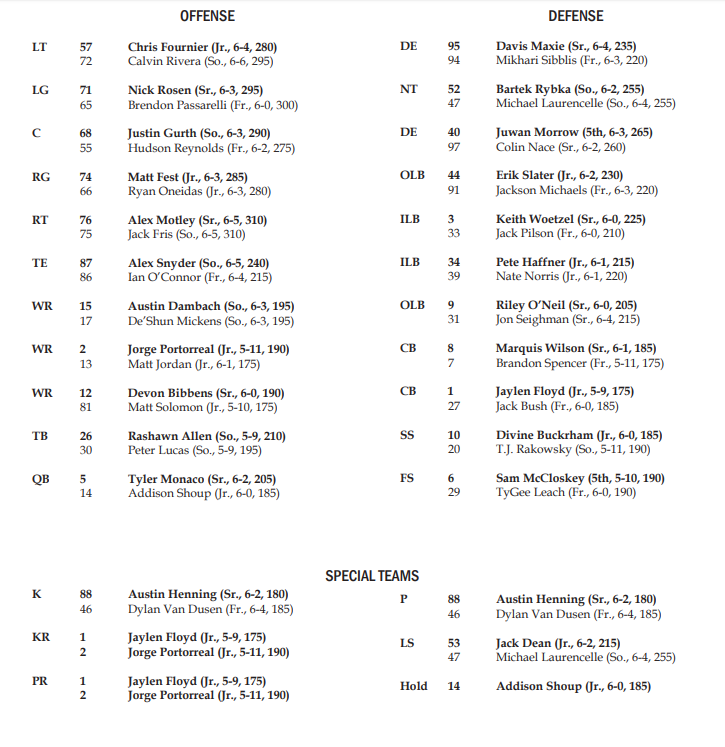