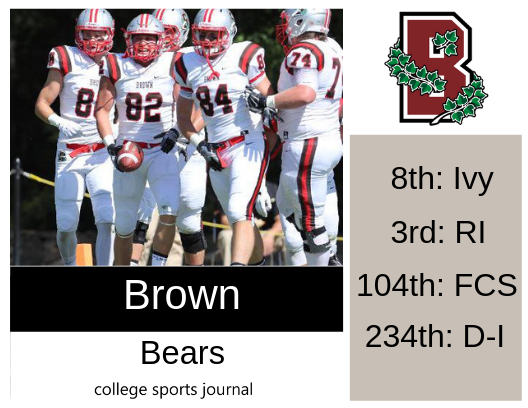 2018 In A Sentence: After a 1-9 season, longtime head football coach Phil Estes stepped down as Bears head football coach after an illustrious 21 year career. To replace him, the Bears hired a hot up-and-comer young coach in James Perry, who happens to have been Estes’ most prolific quarterback as a player (9,294 yards passing and 74 TDs) and one of his most valued assistant coaches – in 2008, he was on Estes’ staff that delivered an Ivy League title.

Biggest Shoes to Fill: LB Daniel Aidman was the Bears’ leading tackler last season with 91. The team captain added 3 1/2 tackles for loss, and coach Perry will have to find a new leader for the Brown defense in 2019.

Key Player: Brown fans have to be excited about the potential for the Bear offense, now that offensive wunderkind Perry is now the head coach. While junior QB Michael McGovern already had a strong season statistically last year (220.3 yards passing per game), he also didn’t find the end zone enough (8 TDs) and turned over the ball too much (10 INTs). With Perry in his corner this year, though, McGovern has the potential to blossom into a star.

Fearless Prediction: Last year’s young cubs took their lumps in a 1-9 season, and a still-young Brown team that needs to build a better defense might find it hard to battle back to .500. Still, counting Perry out is a mistake, and two early-season games against in-state rivals Rhode Island and Bryant (Perry’s former team) should provide plenty of excitement – and offensive fireworks.