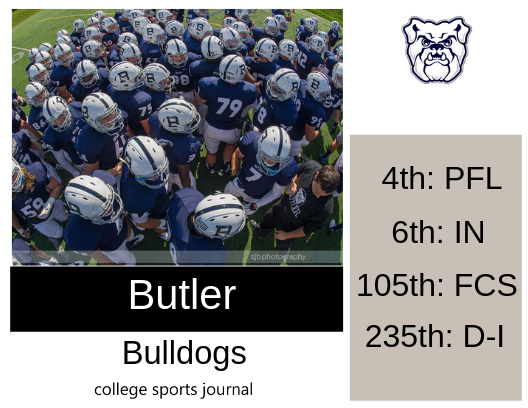 2018 In A Sentence: The Bulldogs got off to a great start with a win at the Missouri Valley Football Conference’s Youngstown State, but could not use that momentum into PFL play to finish 4-7 overall and just 2-6 in PFL play.

Biggest Shoes to Fill: WR Pace Temple led the team with 1,097 yards receiving and nine touchdowns. He left Butler as the the all-time leader in career receiving yards (3,364). He also set the school record for receptions in a season (85) and receiving yards (1,097) as a senior, and became the second player in program history to catch more than 200 passes.

Key Players: S Luke Sennett (13) and LB Mason Brunner (42) highlighted the Butler defense in 2018 in both their junior years to earn All-PFL Second Team accolades. Sennett was the first Bulldog to reach 100+ tackles in a single-season since 2012. He posted a team-best 104 tackles in 2018. Sennett reached a double figure tackle total in five games and ranked second in the league in tackles per game (9.5). Both will look to lead a defense that was the second to worst against the run in the PFL (allowed 231.7 yards per game).

Fearless Prediction: Butler needs to replace seven starters on offense and six on defense but last year’s team did have several close games that could go their way this year. The Bulldogs do have a challenging out-of-conference schedule in opening the season against the two FCS teams that finished undefeated in 2018 in North Dakota State and Princeton, so getting off to a hot start seems unlikely. Expect a slight improvement this year from the Bulldogs.