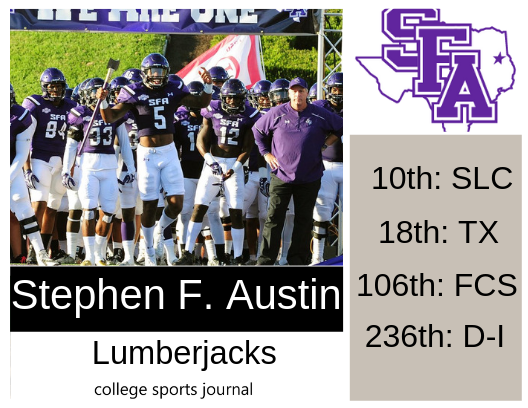 2018 In A Sentence: After Coach Clint Conque resigned amid a university-policy investigation, Jeff Byrd was named the interim head coach to lead the Lumberjacks to just a 2-8 (2-7 SLC) mark. He was not retained, and the school hired 2017 D-II national title winning Coach Colby Carthel away from Texas A&M-Commerce.

Biggest Shoes to Fill: LS Chris Wilkerson played in the 94th East-West Shrine Game® back in January and was rated as one of the top five long snappers heading into the 2019 NFL Draft. He signed with the San Franciso 49ers following the draft and has a very good chance to make the squad.

Key Player: S Alize Ward enters his senior season after being selected two consecutive All-Southland Second Teams. He ranked among the conference’s top 20 tacklers in 2018. His 7.2 tackles per game in Southland play ranked 17th in the 11-team league as Ward completed the season as the Lumberjacks’ second-leading tackler with 58 total tackles and a team-best 36 solo stops.

Fearless Prediction: Getting Coach Carthel in Nacogdoches should be a big help to lead SFA back to respectability. He and his staff signed a whopping 10 three-star recruits SFA’s 2019 class and returns 19 starters from last year. Look for the Lumberjacks to improve a little in the win column but it might take one more rough season before this team turns it around completely.