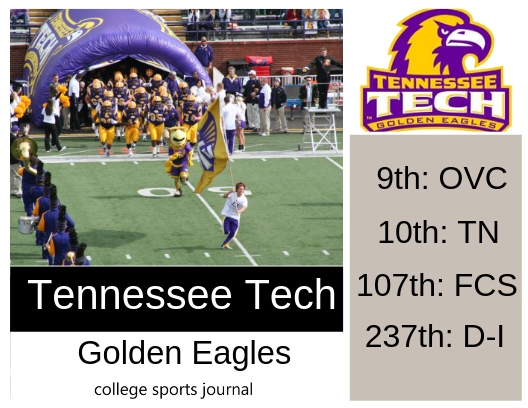 2018 In A Sentence: On Homecoming, head coach Dewayne Alexander and the Golden Eagles broke their 11 game losing streak, upsetting Murray State 27-24. It was the highlight of an otherwise tough 1-10 season, though two of their losses came to nationally-ranked teams (Kennesaw State, Jacksonville State) and another came to an FBS program (Utah State).

Biggest Shoes to Fill: LB Jake Warwick was one of the few seniors on this young team, a linebacker-to-fullback-to-linebacker who netted 72 tackles, 4 tackles for loss and forced 1 fumble.

Key Player: Tennessee Tech’s fortunes took a hit last year when LB Aderick Moore was hurt in the third game of the season. In 2018, he had 95 tackles and 3 1/2 sacks, and Tech fans are hoping that he can reclaim some of that magic he had in 2017 following the departure of several starting linebackers.

Fearless Prediction: A home game against Division II Virginia-Wise provides an excellent chance for the Golden Eagles to at least equal their win total from last year, but it’s not easy to see where the other wins are going to come from for Tennessee Tech in a fairly solid OVC this year.