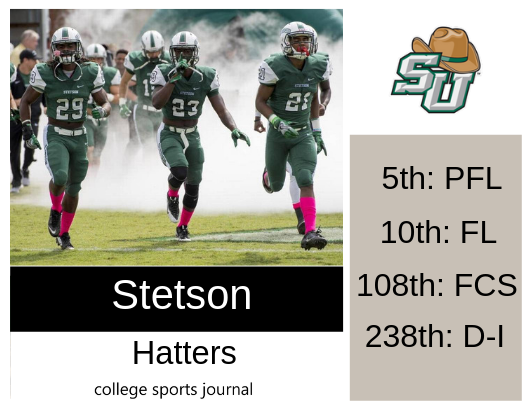 2018 In A Sentence: The Hatters went 8-2 last season and were in contention for the Pioneer Football League title, had PFL winners San Diego slipped up along the way. Stetson went an impressive 5-1 to close out the year, including wins over Davidson, Drake, and erstwhile rivals Jacksonville. Head coach Roger Hughes was tabbed as the PFL’s Coach of the Year.

Biggest Shoes to Fill: 6’8, 240 lb TE Donald Parham was a consensus FCS 1st team all-American at that position last year. He was the top receiving TE in the subdivision last year, averaging 9.4 receptions per game and 146.6 yards per game. He signed with Washington after a tryout, making Parham the first Stetson football player to officially be signed by an NFL team.

Key Player: The key beneficiary of the presence of a consensus all-American TE on the roster had to be WR Steven Burdette, who nabbed 769 yards and 10 TDs as opposing defenses tried to slow down Parham. This year the junior college transfer out of Sardis, Mississippi should be the primary target. Will be up to being the go-to guy?

Fearless Prediction: Can a repeat of 2018 happen for the Hatters? Well, sure – when you schedule 3 Division III opponents like Louisiana College, Western New England, and North Carolina Wesleyan, an over-.500 record seems all but assured. The question is whether Hughes and his Hatters can hop over Dayton and San Diego, who Stetson face at home this year. If they can win both games, they won’t only contend for the PFL title, they could win it this time.