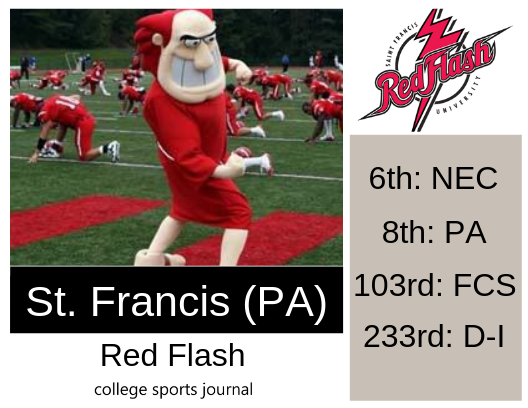 2018 In a Sentence: Three heartbreaking, last-minute out-of-conference losses to Lehigh, Richmond, and Albany (NY) turned what could have realistically been a 5-0 early season surge into a 2-3 oh-what-could-have been stretch of games. The Red Flash’s 4th quarter woes continued into conference play, where late collapses against Wagner and Duquesne had St. Francis limp to a 4-7 record on the season.

Biggest Shoes to Fill: QB Bear Fenimore, a transfer from the University of Houston, started all eleven games at quarterback for the Red Flash, scoring 22 TDs and only logging 6 interceptions. Head coach Chris Villarrial will need to break in a brand-new signalcaller in 2019.

Key Players: The strength of the Red Flash might be its defensive backs, where S Nick Rinella will be joined by a graduate transfer from Miami (OH), CB Cedric Asseh. Rinella (59 tackles, 4 tackles for loss, 1 INT) is a weapon on both defense and special teams (283 yards in punt returns, 2 TDs), while Asseh is a 6’1, 192 lb defensive back that should slot in nicely into the Red Flash secondary.

Fearless Prediction: The schedule seems a lot kinder to the Red Flash this season, though it’s safe to say that most will not be predicting any flashes of upsets of St. Francis (PA) over James Madison in the second week the season. An October stretch of Bryant, Robert Morris, and LIU could provide some valuable opportunities to get some critical NEC wins. If the Red Flash can go 3-0 in those games, they’ll be headed to late October with a chance to compete for the NEC championship. But they need to answer an enormous question at QB first.