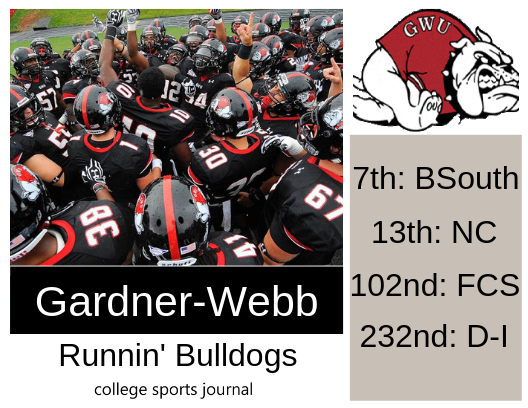 2018 In a Sentence: Win or lose last year, one thing was for certain in Gardner-Webb games: it would not be close. The closest margin of victory in every game the Bulldogs played was 16 points – a 16-0 loss to Charleston Southern. Non-competitive games and a 3-8 record made for a long season for Gardner-Webb.

Biggest Shoes to Fill: The cupboards were pretty bare for the Bulldogs, but LB Corey Horne was a bit of a bright spot on the defense. The senior led the team with 90 tackles – 15 more than the next highest total on the team – and added one sack and a fumble recovery. In a hard to recruit state like North Carolina, his production may be difficult to replace.

Key Players: RB Jayln Cagle was the best offensive player for Gardner-Webb last year. He was the team’s leading rusher with 474 yards in 10 games played. Cagle also added 4 touchdowns. This year, the senior will be looked to as a leader on the offense and will need to improve his production in order for the Bulldogs to have a shot to win games.

Fearless Prediction: With a tough out of conference schedule including two matchups against FBS teams, it seems possible that Gardner-Webb may go through the 2019 season winless. The Runnin’ Bulldogs’ home game vs. Hampton will go a long way in figuring out whether that will happen.