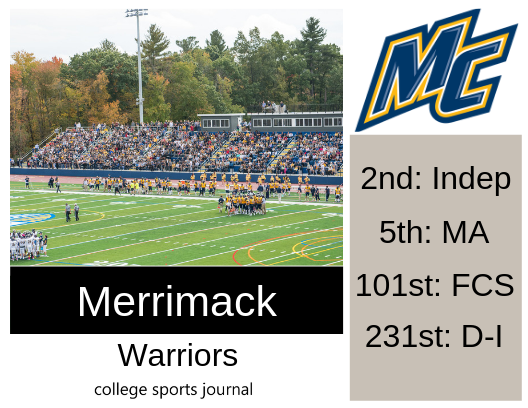 2018 In a Sentence: A 31-14 win over Southern Connecticut (D-II) brought the Warriors time in Division II to a close with a 5-5 record. Merrimack announced they would be beginning their transition to becoming a Division I athletics program in 2019, where their final destination will be the NEC.

Key Player: You know Merrimack head coach Dan Curran, former UNH running back under head coach Sean McDonnell and offensive coordinator Chip Kelly, is going to run an offense with a lot of firepower. Last year true freshman QB Christian Carter had a great first season with a 57.32% completion percentage, 465 yards rushing, 1,681 yards passing, and 18 TDs in only 10 games. He will continue his development at the Division I level this season, building on his great foundation.

Fearless Prediction: If you think Merrimack is going to be a “bye” on the schedule simply because they are transitioning from Division II, think again. Though their schedule is a hodge-podge of Division I and non-Division I opponents, this is a young, talented yet experienced team that could very well finish over .500 in their first transitional year. Technically, they are ineligble for the NEC title.