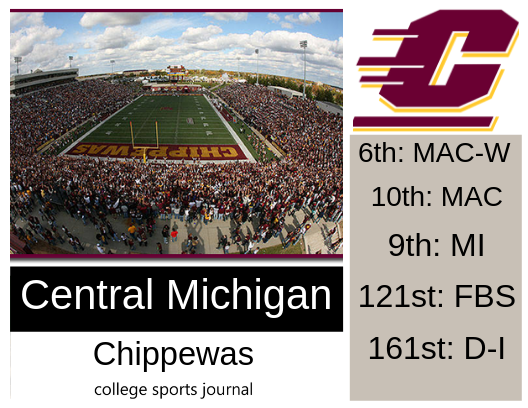 2018 In a Sentence: Last season was incredibly disappointing for all associated with CMU as the Chippewas posted just a 1-win season (1-11 overll & 0-8 MAC) that cost Coach John Bonamego his job.

Biggest Shoes to Fill: CB Sean Murphy-Bunting was the 39th pick overall in the 2019 NFL Draft by the Tampa Bay Buccaneers. The press corner was an All-MAC selection in 2018 and won CMU’s Defensive Player of the Year award after posting 37 tackles, three for loss, two interceptions and two forced fumbles in 2018.

Key Player: RB Jonathan Ward had a productive 2017, rushing for over 1,200 yards. Unfortunately, injuries held the now-senior back in 2018, amounting just over 200 yards on the ground. He has fully-recovered for 2019, however, and his return will look to improve the Chippewa offense.

Fearless Prediction: With a lot of youth on defense and lack of firepower on offense, the expectations are not going to be very high. However, CMU under new Coach McElwain, who has a history of turning programs around (at Florida & Colorado State), should at least get 3-4 wins this season.