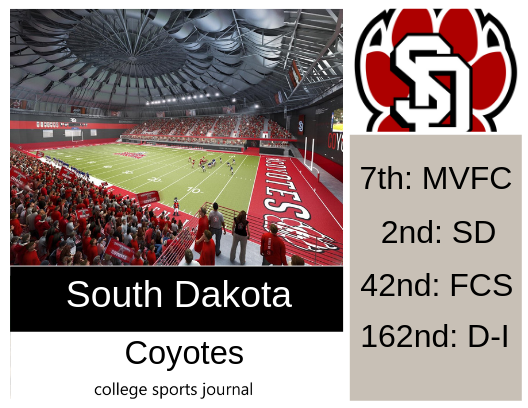 2018 In A Sentence: A year after making its first FCS playoff appearance and getting a win in the opening round, South Dakota had a disappointing 2018 campaign that saw a 4-7 overall record and a 3-5 mark in MVFC play.

Biggest Shoes to Fill: S Andrew Gray started 32 consecutive games to conclude a four-year career at USD. Last season, he tied for the team lead with two interceptions and was the Coyotes’ third-leading tackler with 76 stops.

Key Player: DE Darin Greenfield was a first-team All-MVFC honoree for the second year in a row and was on the ballot for national defensive player of the year. He finished second in the Valley with 14.5 tackles-for-loss during the regular season with a team-high 6.0 sacks. He totaled 55 tackles, forced two turnovers and led the team with 13 quarterback hurries.

Fearless Prediction: It might be odd to be a key game to start the season but the Coyotes first game in hosting the Big Sky’s Montana might be the springboard to how USD finishes in the season. If it can with that game, USD likely will finish with three out-of-confernce victories and very well could finish with a winning record and be in contention for a FCS playoff spot.