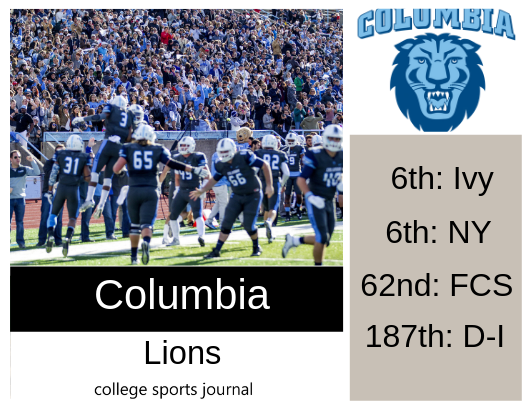 2018 In A Sentence: The good news was that head coach Al Bagnoli guided the Lions to their first back-to-back winning campaigns since 1961-62. The bad news is that the 6-5 Lions weren’t able to take that next step towards to becoming Ivy League title contenders, going 3-4 in league play and losing to Harvard and Yale by a combined score of 97-28.

Biggest Shoes to Fill: FS Ryan Gilbert led the Lions in tackles (89) and tied for the team lead in interceptions (2). He and LB Sean White (81 tackles) were the heart of the strong Columbia defense, who now need to be replaced.

Key Player: DE Daniel DeLorenzi will be one of the players Bagnoli will definitely be leaning on to keep Columbia’s defense near the top of the Ivy League. Last season the speedy outside rusher had 37 tackles, 10 1/2 tackles for loss and 9 1/2 sacks, and the best could still be yet to come during his senior season.

Fearless Prediction: The Lions, with a tougher schedule, might find it more difficult to secure a winning season in 2019. And the Lions, with a lot of senior leadership, shouldn’t be taken lightly, especially if the offense led by sophomore QB Ty Lenhart can start to cook. But it’s hard to see them make that next step to becoming Ivy League title contenders without that happening, especially with so many complete teams atop the conference.