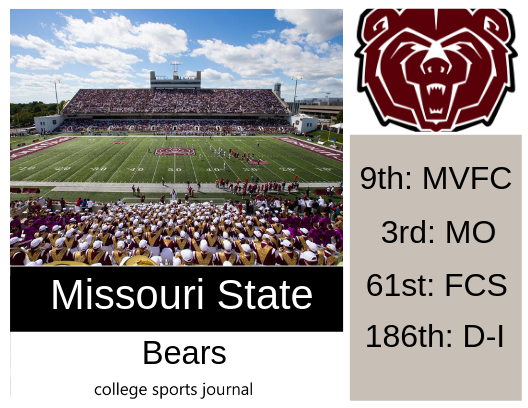 2018 In A Sentence: Missouri State started the season by beating Northern Arizona and Illinois State and also defeated Indiana State, but things went downhill fast from there with the season ending on a five-game losing streak to finish 4-7 overall (2-6 MVFC).

Biggest Shoes to Fill: OL Marquis Prophete started in three different positions on the offensive line but spent most of his at right guard in being named to the All-MVFC second team. He averaged 4.2 knockdown blocks per game this season and was named Valley Offensive Lineman of Week on Sept. 10. He anchored a Missouri State offensive line that produced 345.5 yards per game.

Key Player: QB Peyton Huslig has started the last two seasons and is primed to be the team leader this year, but will have to do it with just one starter back protecting him on the offensive line. He threw for 2,113 yards, 13 touchdowns but also had 16 interceptions. He will need to protect the ball better for the Bears to be more successful.

Fearless Prediction: The Bears will play just an 11-game schedule (FCS teams can play 12 this year) and has a very challenging out-of-conference slate with road games at Northern Arizona and FBS Tulane to go with a home game with two-time Big South champion Kennesaw State. The team returns six starters on offense and all but on are at the specialist positions so if the new line can come together, this team has a chance to be better performance-wise but it is hard to imagine it will surpass the four-win total from last year.