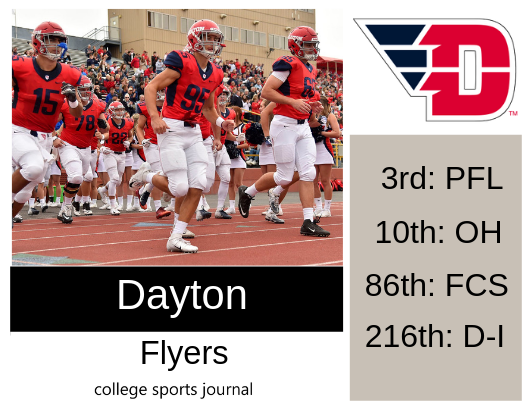 2018 In A Sentence: Dayton was 6-5 in 2018, and finished fourth in the Pioneer Football League with a 5-3 record. Three of the Flyers’ losses came against teams that reached the FCS playoffs.

Biggest Shoes to Fill: RB Tucer Yinger was a two time PFL first team selection in his career. He became the first Dayton running back to post two 1,000-yard seasons when he ran for more than 200 yards in each of his last three games and finished with 1,340 yards. He set the Dayton career records for rushing yards (3,757), yards-per-carry (6.3) and all-purpose yards (4,468).

Key Player: QB Jack Cook is set to lead in his sophomore season. Last years’s PFL Freshman Offensive Player of the Year, was thrust into the starting quarterback role after redshirt senior and four-year starter Alex Jeske tore his ACL in the first quarter of the season’s first game. Cook’s first two starts came against teams that not only reached the FCS playoffs this season, but they both won their first-round game. Cook led all FCS freshmen in passing efficiency (155.5, 8th overall) and was ranked third among all FCS freshmen in passing yardage (2,421) and passing touchdowns (20).

Fearless Prediction: The Flyers return seven starters on offense and six on defense, so experience should not be a huge concern. Plus the team won its last three games and narrow lost to PFL champion San Diego before that by just two points on the road. This year, the Flyers get USD in Dayton. Expect more than six wins it had last year, but it may not be quite enough for Dayton to win the PFL this year.