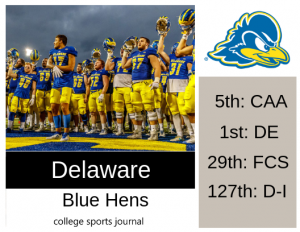 2018 In A Sentence: Delaware used a strong defense to start the 2018 season 7-2 to put themselves in contention for the CAA title and potential playoff seed. However, the Blue Hens lost their final two regular season games before falling in the first round of the playoffs against fellow CAA member James Madison.

Biggest Shoes to Fill: DB Nasir Adderley was a ball hawk for the Blue Hen defense in 2018, and throughout his college career. Adderley had 87 tackles and 4 interceptions along with an additional 7 pass break ups. Opposing teams thought twice before throwing over the middle with Adderley manning the secondary. The Los Angeles Chargers made Adderley the #60 pick in the 2019 NFL draft.

Key Player: Quarterback position. Delaware against struggled under center in 2018, completing only 49.6 percent of the passes among 3 quarterbacks. The Blue Hens eventually settled on QB Pat Kehoe who stabilized the position somewhat, but still put up underwhelming numbers. Delaware will need much more from its signal caller if they expect to take a step forward versus last season’s results.

Fearless Prediction: Delaware looks like a borderline playoff team with a young defense that lost a lot of leadership and talent from its 2018 team. How the new guys on that side of the ball assimilate, plus the quality of the quarterback play when that situation shakes out, will determine the Blue Hens fate in 2019.