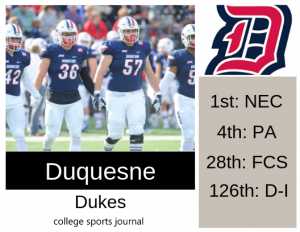 2018 In a Sentence: Things looked grim after an early-season defeat to Bryant left the Dukes at 3-3. But Jerry Schmitt‘s team would win their next five games to win the NEC title, earning a road game against Towson in the FCS playoffs and pulling off a stunning upset, 31-10, in a rainstorm.

Biggest Shoes to Fill: WR Nehari Crawford was Duquesne’s secret weapon in 2018. In two seasons he became the Dukes’ record breaker in terms of receiving yards (2,719) and receptions (190), while also amassing 31 TDs. He ended up in the training camp of the NFL’s New York Giants this offseason.

Key Player: Last year’s NEC Offensive player of the year, RB A.J. Hines, returns to the Dukes for his senior year. He was 3rd in the FCS last season with 1,520 rushing yards, 15 rushing TDs, and had seven 100 yard rushing games in a stellar junior season. His 246 all-purpose yard, 2 TD performance against Towson in the FCS playoffs was a real national eye-opener for many people and it has a lot of FCS watchers paying close attention to see how he’ll do during his senior season.

Fearless Prediction: Even without Crawford, Duquesne is stacked. Hines, QB Daniel Parr, DL Cam Carter and LB Brett Zanotto all return and could be the core of an even better Duke team in 2019. Two challenging – but winnable – road games against Youngstown State and New Hampshire headline the out-of-conference schedule, and if they can win one or both, another special season might be in store in Pittsburgh.