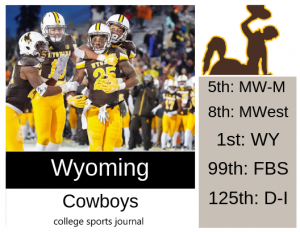 2018 in a Sentence: After a 2-6 start against a brutal schedule, the Cowboys made a quarterback change and found its identity, rallying for four straight wins to finish bowl eligle at 6-6 (though they were one of four elgible teams to not get a bid).

Biggest Shoes to Fill: S Marcus Epps and S Andrew Wingard were the stable force in the Cowboy secondary that will be missed. The duo combined for 779 tackles, 44.5 TFL, 30 pass break-ups and 19 interceptions in their four years in Laramie. Epps was a sixth round draft pick of the NFL’s Minnesota Vikings, while Wingard was signed as an undrafted collegiate free agent by the Jacksonville Jaguars.

Key Player: QB Sean Chambers or Tyler Vander Waal will be the starter for the Cowboys. True freshman Chambers replaced redshirt freshman Vander Waal mid-way last and the team started to win but not with the passing game but rather a smashmouth style running attack. While it might seem Chambers would get the node, he only threw 23 passes in his three full games. Vander Waal passed for 1,310 yards to go along with five touchdown passes and four interceptions. Whichever quarterback gets the nod, they likely will continue to lead a strong running attach with sophomore RB Xazavian Valladay, who must carry the load more with MW leading rusher Nico Evans lost to graduation.