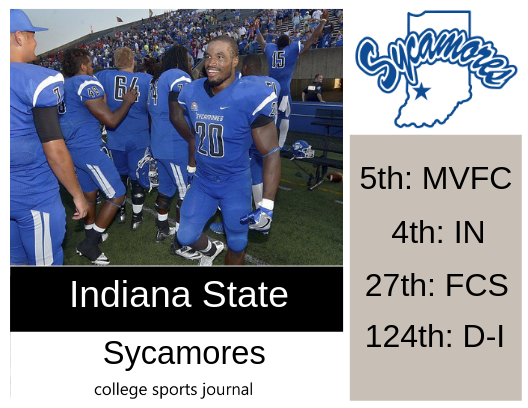 2018 In A Sentence: The Sycamores were winless (0-11) in Curt Mallory’s first season as head coach in 2017 but improved to 7-4 (5-3 MVFC) in 2018. The turnaround was not quite enough to get Indiana State in the FCS playoffs, however – they were one of the last teams on the outside looking in.

Biggest Shoes to Fill: RB Ja’Quan Keys led the Sycamores and ranked fourth in the MVFC with 948 rushing yards. He led the MVFC with 13 rushing touchdowns and 135.4 yards per game but had his season and Sycamore career cut short due to a hip injury in late October. He was a key contributer up to that point and was also a solid mentor for the underclassman especially while he was injuried. His presence will surely be missed.

Key Player: QB Ryan Boyle was the 2018 MVFC Newcomer of the Year. He will be in his senior season this year after transfering from FBS Iowa last year. He finished with 1,627 yards, 12 passing touchdowns and a 62.4 completion percent to lead the MVFC. A dual-threat option, Boyle was second on the team with 610 rushing yards and six touchdowns on the ground. He will be the key to the Sycamore offense.

Fearless Prediction: Indiana State may have taken their opponents by surprise last year, but that will not be the case this year. The Sycamore defense returns just six starters but the group includes All-MVFC LB Jonas Griffith, who looks to lead this side of the ball and get his third straight 100-tackle season. The Sycamore schedule sees ISU avoid North Dakota State and gets South Dakota State at home. This team should finish in the top half of the MVFC standings, which that should be good enough to get into the FCS playoffs.