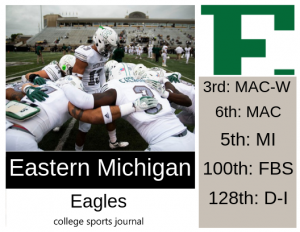 2018 In a Sentence: The Eagles went 7-6 overall (5-3 MAC), good enough for a tie for second in the West Division and a berth in the Camelia Bowl where EMU ended up losing to Georgia Southern 23-21.

Biggest Shoes to Fill: DE Max Crosby was relatively unknown in the NFL pre-draft process but posted enough production in three years for the Eagles (41 tackles for loss, 20.0 sacks, 8 forced fumbles). He was selected in the fourth round of the draft by the Oakland Raiders.

Key Player: QB Mike Glass III is expected to start the year as the Eagles’ signal caller, replacing Iowa grad transfer Tyler Wiegers. Glass gave a jolt to the EMU offense when on the field. The dual-threat quarterback played in eight games last season, passing for 1,024 yards and nine touchdowns while running for 412 yards and six scores.

Fearless Prediction: While a seven-win season was impressive last year, the Eagles could have been better as five of its six losses were by a touchdown or less. With the losses on defense will sting but the Eagles’ offense has a chance to be very good with Glass and RB Shaq Vann leading the way. This team has the talent again to go bowling and even challenge for the MAC West title if it can play well on the road (only five home games this season).