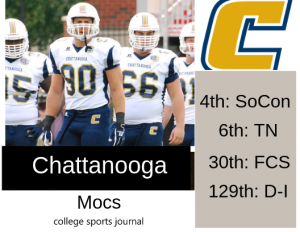 2018 In A Sentence: Chattanooga got off to a promising start in 2018 before losing their last three games to end the season.

Biggest Shoes to Fill: DL Isaiah Mack was a force on the Chattanooga defensive line in 2018. Mack had 78 total tackles, 11 of which were for a loss on the play. He spend a lot of time torturing quarterbacks with 8.5 sacks and two forced fumbles. The 6’3” 305 pounders will leave a huge literal and figurative hold in the Mocs defense in 2019.

Key Player: QB Nick Tiano had an excellent junior season, taking every snap under center, throwing for 2719 yards with 15 touchdowns and 6 interceptions. When he got in trouble, Tiano had the ability to keep plays alive, running for 263 yards. Tiano has pro size at 6’5” 240lbs and can put himself on the NFL draft radar with a big senior season

Fearless Prediction: If the Mocs want to make a run at the playoffs in 2019 they are going to have to beat one of the top three teams in the SoCon as well as pick up a big non-conference win. If they manage to knock off either James Madison or Jacksonville State, that certainly would qualify. I do not think they get either, but the Mocs should have a good year in conference play, which may be enough. Nick Tiano will compete for conference player of the year.