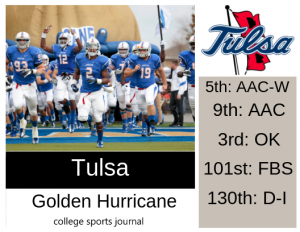 2018 In a Sentence: The Golden Hurricane finished its season with its second straight losing record with a 3-9 mark (2-6 AAC) and the three wins were against lower teams (FCS Central Arkansas, UConn, and SMU).

Key Player: QB Zach Smith (Junior) or Seth Boomer (sophomore) are battling for the signal caller position. Smith started out his career with Baylor and lost his job to Charlie Brewer after the program changed coaches. He’s got the passing chops to be exactly what the offense needs – he’ll push the ball deep. If he’s not great, then it has to be Boomer who utilizes the decent receiving corps to make the Golden Hurricane more dangerous.

Fearless Prediction: Six starters return to the offense for Tulsa, while eight starters are back on defense. The defense looks solid so if the quarterback play, along with the running game led by Corey Taylor II and Shamari Brooks, can keep a balance this team should improve over the three total. If the cards fall right, this team could get to six wins and be back in a bowl but expect around a five win total and Tulsa just missing out on a bowl game and may be looking for its next coach in the off-season.