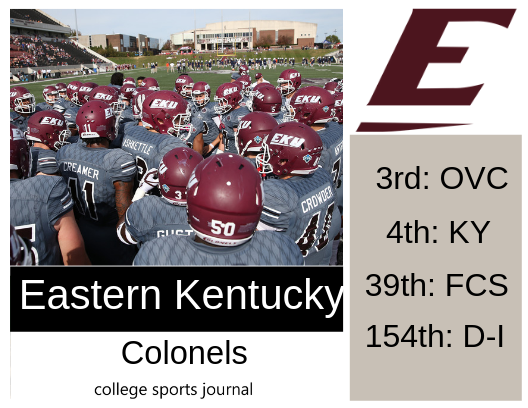 2018 In A Sentence: Eastern Kentucky had a good season in 2018 going 7-4 overall, but 7-2 versus FCS competition, losing games to two FBS teams. The Colonels probably felt like their resume was good enough for a playoff berth and were disappointed being left out of the bracket.

Biggest Shoes to Fill: RB L.J. Scott led a potent rushing attack for the Colonels with 780 yards and eight touchdowns. Luckily, Eastern Kentucky has a couple of good returning backs to fill that gap, including Daryl McCleskey. Key Player: DL Aaron Patrick has already been named a preseason All American on the Colonels defense. Patrick spend a lot of time in the opposing team’s backfield in 2018 with 7.5 sacks on 12 tackles for loss. Fifteen other times, Patrick put a hit on the opposing quarterback. He looks poised for a huge season and could find himself as an NFL prospect at the conclusion of the season where he probably projects as an outside linebacker.

Fearless Prediction: Eastern Kentucky was left out of the FCS playoff field in 2018. The Colonels will be hoping to pick up anoter win over their total last season to make sure they are included in the field in 2019. They feel like they can challenge Jacksonvile State for the Ohio Valley title.