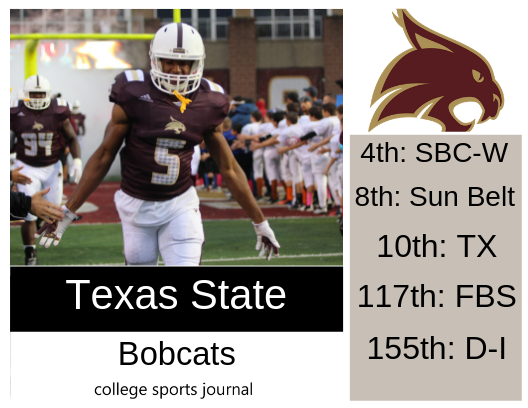 2018 In a Sentence: Coach Everett Withers finished his third and final season in San Marcos having never won more than three games per year–including finishing just 3-9 overall in 2018 and 7-28 in his full tenure.

Biggest Shoes to Fill: TE Kennen Brown was an All-Sun Belt performer last year after leading the team in receptions with 51. He was the top college tight end rated by Pro Football Focus after an ovarll rating of 86.6 and catching 76.1 percent of the passes in which he was targeted. He signed as a free agent with the Los Angeles Rams following the draft.

Key Player: LB Bryan London II was an All-Sun Belt performer last year with a conference high 109 tackles. He is one of nine starters back for the Bobcats so look for him to lead what should be a powerful group on defense.

Fearless Prediction: New Coach Spavital, a 33-year old former assistant at Tulsa, Houston, Oklahoma State, and Texas A&M (and, most recently, West Virginia), will try to bring the air raid pass offense to Texas State. The offense last year was abysmal in ranking 126th in all of the FBS last year and scored exactly seven points in four of its games. The defense made strides, however, and brings back much experience and if the new offense can come around a little bit there is a chance for this team to improve but it likely will take more than one offseason for this transition to occure. Expect a 1-2 win total upgrade this year.