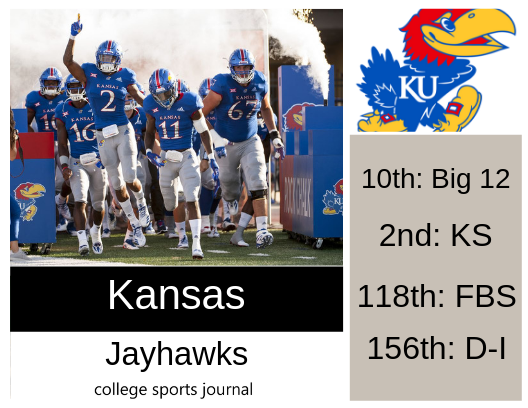 2018 In a Sentence: Few teams have had as eventful twelve months as the hapless Jayhawks. Despite wins over Rutgers, Central Michigan and conference member TCU in 2018, a 3-9 record saw head coach David Beaty fired over the offseason -and Kansas getting served a lawsuit as a result. Former LSU head coach Les Miles takes over a program that has nowhere, really, to go but up.

Biggest Shoes to Fill: LB Joe Dineen led the Jayhawks in tackles with 147 tackles and added 3 sacks to his solid senior campaign. Finding Dineen’s replacement had to have been one of Miles’ many top priorities.

Key Player: Just in case Kansas’ offseason wasn’t interesting enough, starting sophomore RB Pooka Williams, Jr. found himself banned from the team the last seven months thanks to a domestic battery charge. He’ll sit out the opener and will almost certainly not be allowed any more missteps, but on the field Williams was one of Kansas’ true weapons on offense as a freshman. He rushed for a total of 1,125 yards on 161 carries, and ranked sixth in the FBS in all-purpose yards at 150.9 per game. If he stays out of trouble, Miles could make him into a bona-fide star.

Fearless Prediction: Though Les Miles has some interesting building blocks to build upon, it’s hard to see Kansas doing much better than the three wins they had last year. Kansas fans might regret having Pooka Williams sit out Week 1 against Indiana State – without Williams, Indiana State might be favored to win.