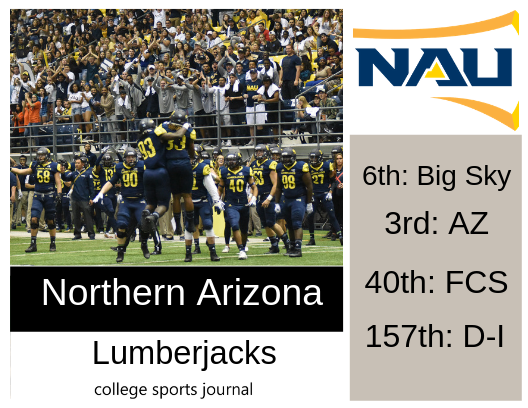 2018 in a Sentence: Northern Arizona embodies the wildcard mentality of a fringe playoff team or a losing season in recent years. The Lumberjacks are one of the swing teams many question since the talent is there, but the situations seem to go haywire towards the end of the season. QB Case Cookus is a talented quarterback – certainly talented enough to compete for the Walter Payton Award this December – but injury and inconsistency have plagued his chances of leading the team into a successful playoff game.

Biggest Shoes to Fill: Emmanuel Butler was a huge threat to the Big Sky and will be useful to the New Orleans Saints. The passing game was a total disappointment once Cookus got hurt. Butler’s numbers suffered too and as a team was 9th in passing yards, ahead of only Portland State and other run-heavy teams. While NAU has powerful runners, their success will falter once again if they rely on only the run to score points. This young receivers core is going to have to grow up fast in order to support Cookus. Key Player: Case Cookus is the Big Sky wonder-boy that came out freshman year hot and since then has been hit or miss. Analysts love questioning whether this year will be any different for him – will it be another year of injuries and disappointment, or if he finally leads a successful playoff charge. Without marquee players to throw to like WR Emmanuel Butler, can Cookus still drive the team down the field? The Lumberjacks are a hardy bunch that does not quit, but the offense will have to do something with all the turnovers the defense creates for them.

Fearless Prediction: The Lumberjacks will take two steps forward this year. The roster loses some very talented seniors. The Lumberjacks should prepare much better for the Missouri St. game this year at home after an embarrassing defeat. NAU will also beat WNMU, UNC, Portland St., Sacramento St., and Southern Utah. That brings them to a .500 season, but NAU has the talent to steal some games they should not win. An upset win against the perennially overrated Illinois St. Redbirds in Normal Illinois or a coinflip win against Idaho at home are two games to watch if you are a ‘Jacks fan. If they can nab them both, Cookus could finally get that final shot at a FCS Playoff run.