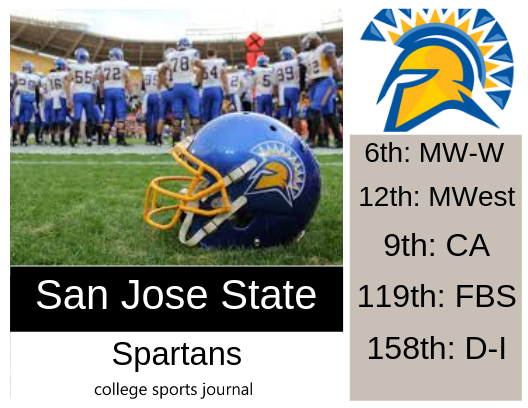 2018 in a Sentence: The San Jose’ Spartans were last in rushing, defense and record in the Mountain West. The old joke “there’s nowhere, but up to go” is painfully true for the Spartans. Coach Brent Brennan is an accomplished coach who has helped produce many NFL names, but simply struggles to produce wins at SJSU. While the Spartans did keep three games close and squash UNLV, they did end up losing to an FCS team. Admittedly, UC Davis did make a deep FCS playoff run, but it still begs the question. “If you cannot even beat a lower Division 1 school, is this really the place SJSU needs to be?”

Biggest Shoes to Fill: Josh Oliver at receiver made significant contributions with 709 yards and four touchdowns. The receivers core still contains several talented, but small players capable of making plays if the ball can make it to them. There are a lot of improvements to fill and fix for this team, but keeping a strong set of receivers is imminent to avoid further regression. The next players up can make a difference in righting the ship if they work as a team.

Key Player: Ethan Aguayo and Jesse Osuna raked in 199 tackles, 14 TFL, two sacks, three interceptions, six pass breakups, six QB hits, three forced fumbles and one recovered fumble. They were a dynamic linebacker duo last season, but everyone has to fly around on defense and get to them ball. If Aguayo and Osuna do the majority of the heavy lifting again, then it will be likely to see SJSU defense at the bottom of the standings.

Fearless Prediction: Coach Brennan will need to be fearless this season to show SJSU he can right the ship. 3-22 record at the FBS level is ridiculously bad. If Brennan does not give a reason fir SJSU to believe this season or next, then 2021 will be the end of his tenure. It is always a risk, but play a freshman if they play better than the senior. Under 1,000 rushing yards as a program is unacceptable. Last in defense and in wins is unacceptable. If the Spartans play like they did last year it could be another gritty last place finish with two wins. SJSU is favored over Northern Colorado by 17 points to start the season. If the Spartans cannot make that spread look for the only other win to be New Mexico or at UNLV.