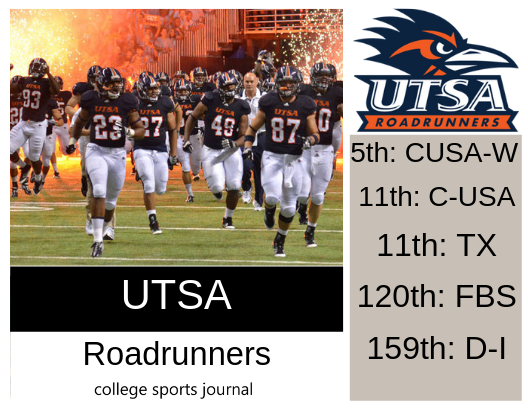 2018 In a Sentence: UTSA finished dead last in the nation in total offense – averaging just 247 yards per game – and scoring a mere 14 points per outing–yet still finished with a 3-9 overall record (2-6 CUSA).

Biggest Shoes to Fill: LB Josiah Tauaefa surged as a junior last year. He led UTSA with 113 tackles, 11.5 tackles for loss, 4.5 sacks and three quarterback hurries. He was also named one of 10 semifinalists for the Butkus Award, given to the nation’s top linebacker. He decided to enter the NFL draft after this junior season but went undrafted. He was signed by the NFL’s New York Giants in a free agent contract, however.

Key Player: CB Cassius Grady will be key with the top four tacklers gone in his senior season. Grady should be solid in the secondary as well as the team’s top playmaker when the ball is in the air. He came from the JUCO ranks last year to make an immediate impact with 45 tackles and a team-high four interceptions.

Fearless Prediction: The good news for Coach Wilson’s team is that nine starters return from last year’s offense. However, the bad news is that the 2018 team finished with nearly half of the rushing total as 2017. The key will be to turn this statistic around this year. The talent is a year older, so there is a chance this team will be better, but the team is still fairly young. A win or two improvement over last year’s three win output likely is the best that can be asked.