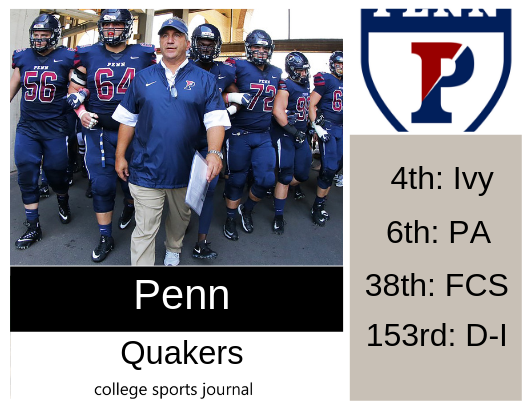 2018 In A Sentence: The Quakers remained in the upper echelon of the Ivy League with a 6-4 record and a perfect 3-0 out-of-conference record. They couldn’t get over the hump, however, when it came to challenging the top teams for the title.

Key Player: RB Karekin Brooks has become a tremendous all-purpose threat out of the Quaker backfield. His ability to run the ball (246 yards rushing vs. Brown) and catch the ball (7 receptions for 45 yards vs. Princeton) shows how versatile the senior from Marietta, Georgia really is. He should continue carrying the Penn offense during his senior campaign.

Fearless Prediction: Priore has done a tremendous job keeping the Quakers in the Ivy League hunt year in and year out, but the Quakers still have a few missing pieces to replace in order to truly get into the conversation for the Ivy League title. If they can find some answers on defense to replace those two all-Ivy defensive players, an Ivy League title might be on the line for them in their final game of the year versus Princeton.