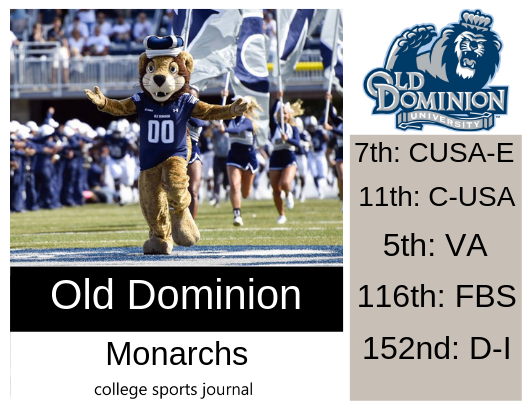 2018 In a Sentence: The Monarchs started the season at just 1-6 (although the one win was over the ACC’s Virginia Tech) but rallied to a 3-2 end to finish the season at 4-8 overall (2-6 C-USA) and its second straight losing season.

Biggest Shoes to Fill: DE Oshane Ximines nished fifth in FBS with 12 sacks and tied for 10th in FBS with 18.5 tackles for loss. He finished his senior season second among active FBS players with 33 career sacks. He was drafted in the third round of the NFL Draft by the New York Giants–becoming the first ever ODU player to be drafted in the NFL.

Key Player: LB Lawrence Garner led C-USA in 2018 with 11.1 tackles per game and tallied 100 tackles on the year–the fourth 100-tackle season in ODU history. With just three other starters returning, junior Garner will be key to lead a defense that switches to a 4-2-5 alignment under a new coordinator David Blackwell, who comes to the Monarchs after stints at East Carolina, Jacksonville State, and Fordham at the same position.

Fearless Prediction: With just six total starters back overall, it is hard to imagine that the Monarchs will improve on its four-win total from last year. Expect a some growing pains with this team this year and likely will regress by a game or two in the win column.