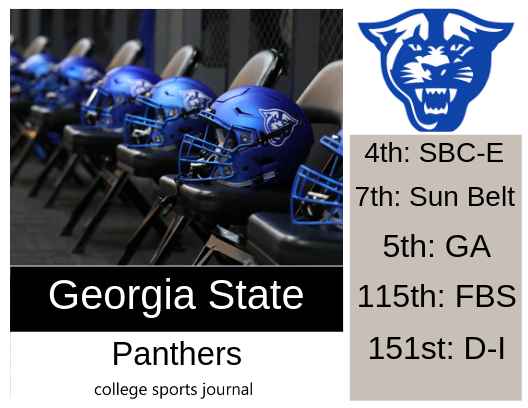 2018 In a Sentence: The Panthers dipped to just 2-10 overall (1-8 SBC) after going bowling following the 2017 season–and six of those losses were decided by three possessions or more.

Biggest Shoes to Fill: LB Michael Shaw was a four-year starter at outside linebacker who finished as Georgia State’s career leader in tackles for loss with 26.5. He finished ranked fourth in GSU history with 216 career tackles and tied for fourth with 7.0 sacks. Shaw signed a free-agent contract with the NFL’s Jacksonville Jaguars this past spring.

Key Player: QB Dan Ellington returns behind center after leading the team in passing and rushing in his first year with the program. He threw for 2,119 yards and rushed for 625 more on the ground while accounting for 17 touchdowns (12 passing, 5 rushing) to earn All-SBC honors. He will be working under new offensive coordinator and quarterbacks coach Brad Glenn so how well these two mesh together will be key to the Panthers’ offense.

Fearless Prediction: Georgia State returns nine starters on offense, seven on defense and standout P/PK Brandon Wright so experience will be there for the Coach Elliott’s squad. But the fact that the Panthers have a tough schedule and are coming off a battered season, expect the Panthers to improve but likely will not mean a large number of increased victories. Three or four wins seems like the ceiling for this team.