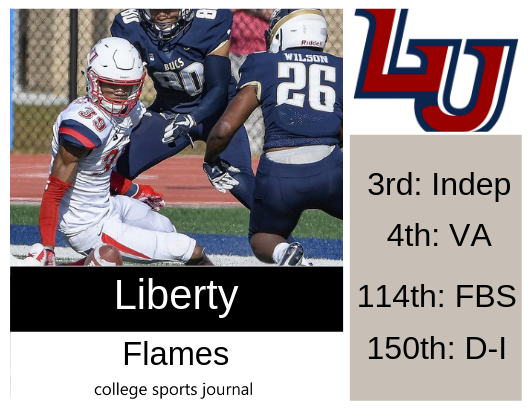 2018 In a Sentence: In Coach Turner Gill‘s final year before retiring and in its first season as a full, yet transitional FBS squad, Liberty finished with a 6-6 overall record.

Biggest Shoes to Fill: DB Jeremy Peters was a key member for the Flames’ defensive backfield for the last four seasons. He finished his career as one of five active defenders with 40 or more career games played (42). Peters ended his days as a Flame with 127 career tackles (101 solo, 26 assisted) and 29 career pass breakups, which ranks second best in program history.

Key Player: WR Antonio Gandy-Golden became the second player in program history to post back-to-back 1,000 yard receiving seasons, finishing his junior year with a team-best 1,037 receiving yards and 10 touchdowns. The Biletnikoff Award watch list member would have ranked No. 14 in the country in receiving yards per game in 2018 (94.3), if Liberty was eligible for the national statistics rankings. He should the prime target again for QB Stephen Calvert, who has three year of starting experience under his belt.

Fearless Prediction: Coach Hugh Freeze is a proven winner at the most elite level of college football as he coached previously at the SEC’s Mississippi before being let go amid a number of serious NCAA violations. Liberty finished 2018 34th in FBS at 33.3 points per game, but its defense will pose the biggest problems. The Flames finished tied for 122nd in FBS play in 2018, giving up 5,817 yards while surrendering 36.8 points per game. The offense should be just fine with Calvert and Gandy-Golden leading the way. If it can improve the defense just enough, the Flames could go to its first ever bowl game in its first year of eligibility.