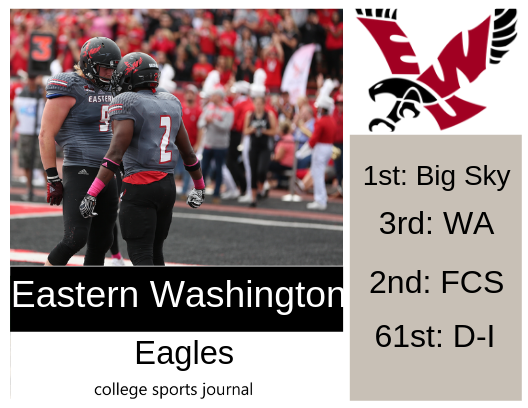 2018 In A Sentence: EWU finished second in the nation just behind the perennial Bison champions. A fantastic season of 12-3 is something to celebrate, minus the title loss. The only other losses would be to Washington State and Weber State. Last year, Eastern Washington scored 48 points or more in seven of the twelve games they played.

Biggest Loss: EWU lost a lot of talent last year, but in the same regard has the depth to match the other FCS powerhouses. Nsimba Webster could be the “biggest” loss as he was thrown to twice as much as receiver two, 1,379 yards receiving, and 11 touchdowns. Among the other losses include a graduate transfer from Gage Gubrud to Washington State, defensive stud Ketner Kupp graduated, and star running back Sam McPherson.

Key Player: Eric Barriere is a favorite for player of the year. After a Gage Gubrud injury, Barriere came in and stole the show. He can run, pass, and has athleticism worthy of playing at a high level. With a softer schedule than usual it is Barriere’s time to shine as he can unleash an insane amount of yards during the regular season. If Barriere is not in the top ten for player of the year then something went wrong with EWU’s plan.

Fearless Prediction: Eastern Washington will be on a revenge tour this season. There are few tough games on the schedule this year and an abundance of talent. While the offense went off last year, it is entirely possible that the lesser teams will get just as or more mangled. The first game of the schedule will be a loss as University of Washington is just too strong for EWU. Week three will be a marquee matchup of top ten FCS teams at Jacksonville State. While this will be an offensive slugfest, the Eagles should be able to win by two scores due to the defensive strength of the team. Later down the schedule EWU will play at Montana. A “pit of despair” for visiting teams, but the Eagles have thwarted the Griz well in recent years. At the end of the season it is entirely possible for EWU to go 11-1 or 10-2. A double digit win record this season is all but guaranteed, unless the injury bug bites down as hard as possible.