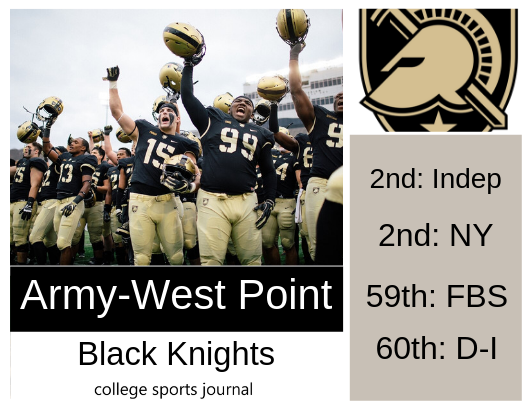 2018 In a Sentence: Army lost two of its first four games but the Black Knights rolled off eight straight wins, including the third straight in its long-standing rivalry with Navy. Army capped the season in style with a win in its school-record third consecutive bowl game–a blowout win over Houston in the Armed Forces Bowl.

Biggest Shoes to Fill: FB Darnell Woolfolk was second on the team in rushing each of the past two seasons but led last year’s squad with 221 carries. He finished with a career-high 37 rushing touchdowns in his last season and was always a key to the Black Knight option attack.

Key Player: QB Kelvin Hopkins Jr. made a seamless transition into the Army signal caller–stepping in for the departed Ahmad Bradshaw. Hopkins led the team in rushing yards (1,017) and rushing touchdowns (17), The now-junior became the first Army quarterback to pass for more than 1,000 yards in a season since Carson Williams in 2007 but without Woolfolk, as well as RB Andy Davidson, he will need to gel with the new backfield as a key for the option attack to be as prolific as it was in 2018.

Fearless Prediction: The Army defense was ranked in the top 10 in all of FBS last year but only returns four starters so it will need to make sure the new pieces fit well. What will help the Black Knights is its schedule. Outside of its second game at Michigan, the Black Knights will be favored in every other game. Another 10-win season will be the result.