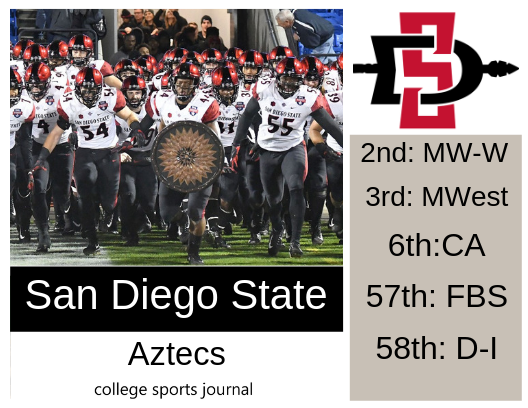 2018 In a Sentence: The Aztecs were 6-1 through their first seven games, including wins over ranked Arizona State and Boise State but SDSU lost their final three Mountain West games before losing 27-0 to Ohio in the Frisco Bowl to finish 7-6 overall (4-4 MWC)

Biggest Shoes to Fill: TE Kahale Warring was an honorable mention All-MWC selection after he had a team-high 31 catches for 372 yards (12.0 avg.). He also had a team-high-tying three touchdown catches and declared after his junior year for the NFL draft where he was third-round pick by the Houston Texans. The passing game was the struggle last year for the Aztecs but Warring was the bright spot and will be missed.

Key Player: RB Juwan Washington will again be the lead back this year and will be key for the Aztec offense that is always run first. He finished 2018 with 999 rushing yards and 10 touchdowns despite missing the last four games with a fratured clavicle bone. The win total last year showed his value so the key with him this year will be to stay healthy.

Fearless Prediction: The offense is moving more to a spread offense so for San Diego State to improve on a seven-win total, QB Ryan Agnew will be looking to take a step forward after throwing just 10 touchdowns and six interceptions in 2018. The Aztec defense should again be strong despite only returning five starters. If the new offense sparks and the running game stays at its steller self, this team will be in the running for the MW West Division crown but while it will finish with another win or two, will be just short of the title.