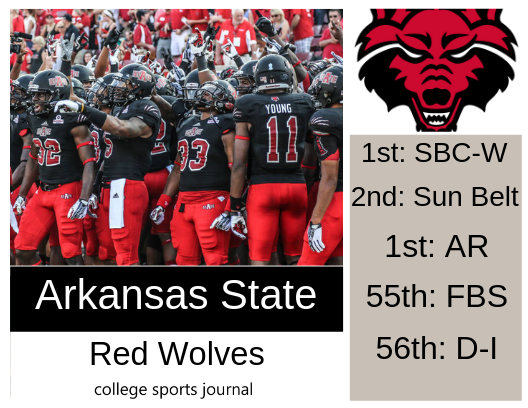 2018 In a Sentence: The Red Wolves finished the second half of the schedule strongly, but a 47-43 midseason loss to Louisiana-Lafayette denied them a chance to play for the first-ever Sun Belt championship game and finished with a 16-13 loss to Nevada in the Arizona Bowl to go 8-5 overall (5-3 SBC).

Biggest Shoes to Fill: QB Justice Hansen was the the Sun Belt player of the year each of the past two seasons. He completed the 2018 regular season as the Sun Belt’s leader in total offense (297.3 ypg), passing yards (264.3 ypg), passing touchdowns (27) and points responsible for (202), while also ranking among the top 16 players in the nation in each category. Hansen is also the Sun Belt’s second all-time leader in passing touchdowns (83) and ranks sixth in total offense (10,807 yards) and eighth in passing yards (9,858).

Fearless Prediction: While there is some question on the ASU offense, the defense should be one of the best in the conference once again with the amount of production returning at all three levels. If Bonner (or another quarterback) can manage the offense at least to some efficiency, the Red Wolves should see itself this year in the Sun Belt Championship game. In the fall camp, Coach Blake Anderson lost his wife to breast cancer and has taken a leave of absence. Assistant Head Coach and defensive coordinator David Duggan will serve as the interim head coach while Anderson is out.