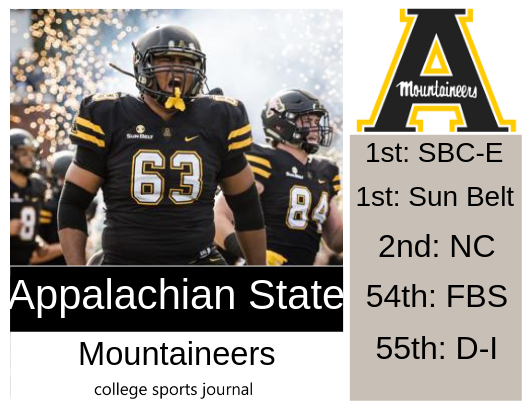 2018 In a Sentence: The Mountaineers almost pulled off amajor upset in the opening week but lost 45-38 in overtime at Top 10 Penn State in the opening week and rode the momentum into a Sun Belt Conference championship by winning the inaugural Sun Belt title game over Louisiana. The Mountaineers then blew out Middle Tennessee 45-13 in the New Orleans Bowl to finish 11-2 overall (7-1 SBC) but one loss was Coach Scott Satterfield departing for the same job at Louisville.

Key Player: QB Zac Thomas was named the 2018 Sun Belt Offensive Player of the Year after scoring 31 total touchdowns. He threw for 2,039 yards and 21 touchdowns with just six interceptions in his first year as a starter. How the junior adjusts to new Coach Eliah Drinkwitz will be key to the Mountaineer offense. Drinkwitz comes to App State after being the North Carolina State offensive coordinator the past three years.

Fearless Prediction: The transition to a new coach may not have happened with a better sitution than what App State has. Fifteen starters return from both sides of the ball. The losses in the secondary seem like the only question mark for this team. The Mountaineers should not only win the Sun Belt but very well could challenge for the Group of Five’s New Year’s Six bowl bid.