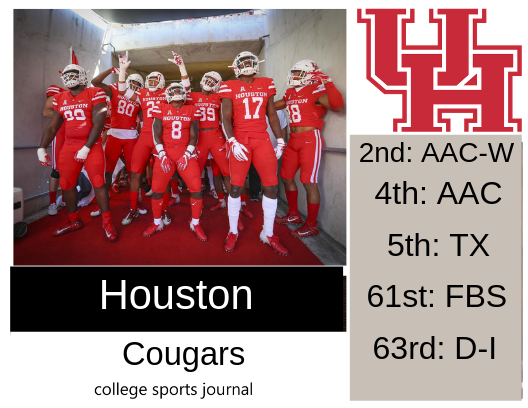 2018 In a Sentence: Houston opened last season by winning seven of its first eight games, the program’s best start since winning 10 straight to open the 2015 season. Injuries and miscues on the defensive side caught up with the Cougars after this and lost four of their final five games, including an embarrassing 70-14 setback to Army in the Armed Forces Bowl in what would be Major Applewhite‘s last season as the head coach–finishing 8-5 overall (5-3 AAC).

Biggest Shoes to Fill: DT Ed Oliver was fifth nationally and second in the AAC with an average of 1.81 tackles for loss per game this season. He was Houston’s first ever three time All-American honoree and was selected in the first round of the NFL Draft by the Buffalo Bills.

Key Player: QB D’Eriq King set the single-season touchdown mark in the AAC with 50 total touchdowns responsible for despite missing the final two games with a knee injury. He finished third in the country in points responsible for with 302 behind two NFL first round draft picks in Ohio State’s Dwayne Haskins (324) and Oklahoma’s Kyler Murray (324). With a new coaching staff, he will be the key cog to make the Cougars go.

Fearless Prediction: Houston hired away Coach Dana Holgorsen away from the Big 12’s West Virginia and that fact alone lets most know that Houston wants to bring a bigger image to the university. On the field, Holgorsen wants to bring the same prolific offense he had while at all of his prior coaching spots. With King at quarterback, that should be just that this year. The key will be the defense, where Holgorsen brought in Joe Cauthen after he spent the past five seasons as the defensive coordinator at Arkansas State–e among the top teams in defensive scoring over the past five seasons. The Cougars will be better than than eight wins but not quite good enough to win the AAC West Division.