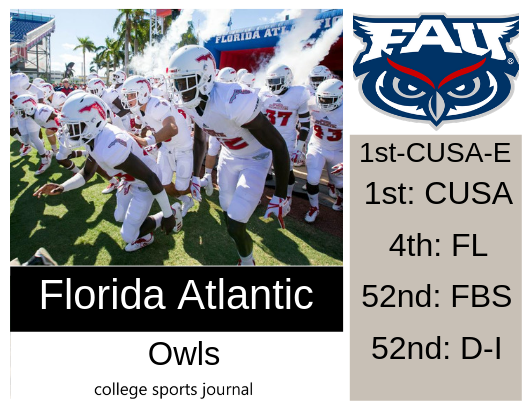 2018 In a Sentence: FAU went just 5-7 (3-5 C-USA) that ended poorly with closed with painful losses to North Texas and Charlotte by three points apiece. This was a year after Coach Lane Kiffin led the Owls to a bowl victory during his debut campaign in Boca Raton in 2017.

Biggest Shoes to Fill: RB Devin “Motor” Singletary had the offense run through him all of last season. He managed 1,348 yards rushing and 22 touchdowns last season despite being targeted by every opposing defense. Singletary was selected in the 2019 NFL Draft with the third-round selection by the Buffalo Bills.

Key Player: QB Chris Robison will need to make a big step forward from his freshman season to his sophomore campaign after one year in the Coach Kiffin system in order for the Owls to be more competitive on offense. He threw for 2,533 yards and 12 touchdowns but also had 12 interceptions. He will have some solid offensive linemen and strong returning receiving threats to work with in TE Harrison Bryant and WR Tavaris “Pico” Harrison.

Fearless Prediction: The Owls likely will open the season with consecutive losses facing Ohio State and UCF but despite the low momentum to start will move forward with a strong finish to the season. With uncertainties and a number of new players, one would think this means doom for the program. But the talent is there for the Owls and when expectations are lessened seems to be when Coach Kiffin does his best. Expect the Owls to exceed these expectations and win the C-USA crown this year.