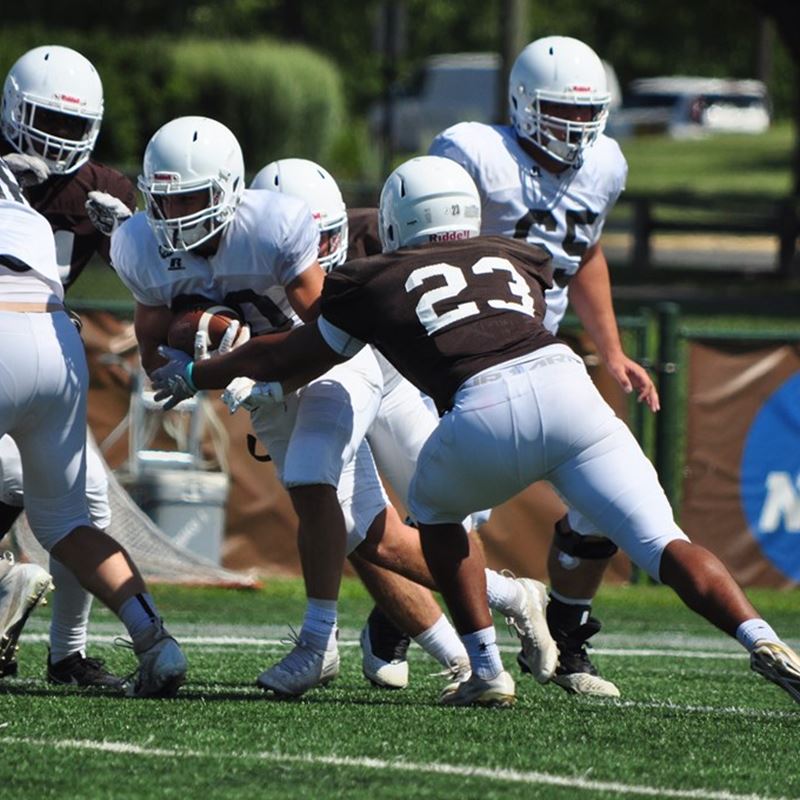 Much of preseason practice for a football involves building the skills, plays and toughness that’s required for the full grind of a full season.

For the 2019 Lehigh Mountain Hawks, it seems to be about more than just that.

With new head coach Tom Gilmore, a big theme that has emerged in preseason training camp has been one of building relationships.

Through the process of his hiring many new members of staff, and the sheer number of freshmen that had to be recruited and suited to fill out the roster, by necessity Gilmore has needed to do a lot to bring the staff and team together this fall.

“I’ve been really pleased the way this guys have come together, and they’ve really bought in,” he said. “And I think that’s hard. You get a successful, long-time coach like Andy Coen, he retires, a mostly new staff comes in – we’re building that trust, they’re getting used to the things we do. I think they’ve really adapted really well.”

Gilmore saw when he came in that this team was a mixture of players who had starters here for years and underclassmen.

“We’re a young team,” he continued. “There are a lot of upperclassmen in the top positions. I thought the team has done a really good job so far working hard and doing what we’ve asked them to do. The freshman, too, have done a good job overall learning the system and a few of them are putting themselves in a position to play.”

I talked to OL Nick Rosen, WR Jorge Portorreal, LB Keith Woetzel, and FS Riley O’Neil and they confirmed that they were rooming with underclassmen to make their transition from high school football to college football easier.

“So my roommate is WR Jack Sutton for the summer,” Jorge said. “I’m just really working on helping him with the playbook and transition. It’s just making things more obvious, and really breaking things down for them you know in terms of plays. And you go way more in depth in terms of football and then you know in terms of life in Lehigh University just the school aspect, because they don’e understand it yet. ”

“They’ve been doing a really good job going through the playbooks,” Rosen said. “I’m rooming with OL Brendan Passarelli, and when we get back at night he’ll ask me questions about the playbook. I try to walk him through, get his head in the playbook. And it’s a good refresher for me too, so it’s beneficial for all of us. They’re excited to be here, and ready to learn. They’ve been here seven days, I’ve been here four years.”

The offense has been developing through camp, though it has been slowed by injuries to the offensive line. Though injuries caused a bit of shuffling, the left side of the line, OT Chris Fournier, OG Nick Rosen and C Justin Gurth were solidly set mid-way through camp.

The right side has been a work in progress with several names appearing on the two deep on that side. It’s likely Lehigh Nation won’t know exactly who will be lining up there until next Saturday at 12:37 PM when the lineup cards are exchanged with St. Francis (PA) at midfield.

“You hear him yelling jumping up and down and stuff like that,” Rosen said. “But it’s a good energy, and that’s what we’ve seen from this coaching staff – high energy, bringing a lot of juice, getting the team going. That’s going to carry through to the games.“

At quarterback, QB Tyler Monaco, who waited his turn behind QB Nick Shafnisky and QB Brad Mayes, is finally set to be the starter during opening day. It was not a foregone conclusion that he would be the starter, but he earned it almost immediately.

“He established himself as a leader in the spring, and he continued that throughout the summer,” Gilmore said. “He’s been around the system a long time, and he’s very comfortable about the Xs and Os. So far, I’ve been impressed with his work ethic and his knowledge of the system.”

Senior Tyler Monaco has been a leader on and off the field through the spring and summer and is the most experienced of the five quarterbacks in camp for the Mountain Hawks.

In the skill positions, there is some guys returning that have some key experience and success. RB Rashawn Allen, who thrilled Lehigh fans last year at Navy with a pair of TD runs, and top receivers WR Jorge Portorreal and WR Dev Bibbens return on the outside. Portorreal was recognized by the Patriot League on their preseason all-Conference team.

“It’s a testament to what I have to do this season,” Jorge said. “I’ve been working really hard this summer and try to work on you know completing the goals ahead over the summer. That way they pay off in the fall.”

I asked him what he was doing this offseason to prepare.

“Just get bigger, faster, you know,” he said. “Get work on some route definition working on bringing more art to my routes, blocking, being more physical. Every part of my game I wanted to enhance and get better so that our offense can improve.“

With the graduation of all-time leading rusher Dom Bragalone, @LehighFootball will rely on a young and talented stable of running backs in 2019.https://t.co/gP1HgmulVa#GoLehigh #beGREAT pic.twitter.com/VohlsT7STL

Proven commodities Jorge Portorreal and Devon Bibbens return, but the Mountain Hawks are working to develop the young talent at both wide receiver and tight end.

On the interior defensive line, DT Juwan Morrow and DT Jason Dooling, DT Mike Laurencelle and DT Bartek Rybka will be manning the inside at one time or another. Before the season, Gilmore told me how happy and important it was to have Morrow return for his final year of eligibility – he’s being looked at as a critical piece of the 2019 defense.

“Having a guy like Juwan back on the D line is a major bonus,” he said. “He’s not only a really good player, he could be a dominant player for us up there. He’s also a great leader in the weight room, on campus, he’s one of those guys that is always doing the right thing and is highly respected amongst the players and coaches. He could be a major, major force on the inside.”

On the exterior defensive line, DE Davis Maxie and DE Erik Slater have been strong on the outside as well, with DE Jack Kircher also being worked in as well. This has the potential to be a very strong unit.

9️⃣ returners and 4️⃣ newcomers tasked with stopping the run and getting after opposing QBs.

Linebacker too features the return of a lot of players with game experience, like LB Keith Woetzel, LB Jon Seighman and LB Nate Norris. Out of necessity, Seighman played a lot of different positions in the spring and summer, but that experience means that this team, while young, does have quite a few experienced hands at the controls.

“The rollover was definitely tough,” Woetzel told me. “I mean coming into my senior year and having to take on a brand new coaching staff, it’s definitely tough to adapt to and get used to all the new faces. But I mean football is football. You’ve got to move forward, and schemes will be different but football is still eleven guys on defense eleven guys all on offense playing against each other. So I think if you just focus on that, it wasn’t that tough for us as a team to move forward.”

Having the continuity of having linebackers coach Mike Kashurba helps, too.

“Even with the rollover of coaching staff, the defensive players are very used to what coach is preaching and what his schemes are like,” Woetzel continued. “But you know there is definitely new stuff and definitely old stuff that the older players can adapt to and then also be familiar to the old.”

The secondary, too, is loaded with faces Lehigh fans will instantly recognize.

5th year senior S Sam McCloskey was another very welcome face to return to the secondary this fall. He wasn’t available to interview when I went to practice because “he was working on a senior presentation for his summer classes,” coach Gilmore told me.

“We’ve played together for quite some time, so you know it’s nice to come in and you know feel comfortable with the guys you play next to,” O’Neil told me. “We’re so comfortable together that even know being out there together we just have so much fun. I think the younger guys are really responding well to the energy that we have out there in practice, too.”

Over the years, the defense has taken a heaping share of fan fingerpointing in terms of won/loss record, but to O’Neil, that just adds extra motivation going into the season.

“We try to block out the voices outside of our program as much as we can, but we definitely play with a chip on our shoulders,” he said. “Every single day you go out, you know you know who the haters, and you know who supports you, and you take that as it is. And right now it brings you motivation to go out there and grind to get better.”

Walking away from my interview with Riley, overall I got the feeling that this secondary will be a source of strength for this Lehigh team.

Kicking off our @LehighFootball season preview series with a look at one of Lehigh’s deepest positional groups: the secondary.https://t.co/bI4IoaoGPl…#GoLehigh #BeGREAT 🏈 pic.twitter.com/x88n2EXIFV

At special teams, there is a lot of turnover. Gone is P/K Ed Mish, who was a hugely reliable punter and kicker for the Mountain Hawks.

Lehigh has a pair of kickers in camp, with senior Austin Henning serving as the veteran. Henning kicked and punted in place of an injured Mish in 2017, converting 14-of-18 extra point attempts.

Freshman Dylan Van Dusen from Radnor, Pa., will challenge as both a placekicker and punter.

“Henning is a guy that did it all for us in the spring and we have a freshman coming in, Van Dusen, who is a multi-dimensional guy who will do that as well,” Gilmore said. “Austin had a solid spring and a really good summer so I’m looking forward to him doing some big things. The punting game is huge from a field position standpoint, so it’s something we’re going to emphasize, maybe more than any other special team.”

“On special teams the two biggest things are you have to have a lot of pride in what you’re doing and have outstanding effort,” Gilmore said. “A lot of players use special teams as just something we do that we have to do and that’s not the approach that we’re going to take. It’s an integral part of the game. It’s anywhere from 20-25 percent of any given game. There are a lot of plays that you’re missing out on if you’re not trying to do a great job with special teams.

“Part of it is putting the right personnel out there,” he continued. “We’re going to use some starters and some of our best players and put them in positions to make big plays on special teams. Coach DiMichele is going to be heading our special teams this year. His energy and his enthusiasm is going to help that as well. Just coming out with the right attitude and getting the job done, that’s a critical part of the game, especially in a tight contest.”