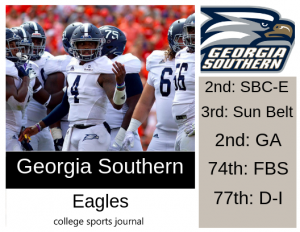 2018 In a Sentence: Georgia Southern closed the year on a high note when K Tyler Bass hit a 40-yard field goal as time expired to lift the Georgia Southern to a dramatic 23-21 victory over Eastern Michigan in the Camellia Bowl to finish 10-3 overall.

Biggest Shoes to Fill: RB Wesley Fields became the first player in Georgia Southern history to lead the team in rushing (1,050) and receiving (237) yards in the same season a year ago. Fields signed a free agent contract with the NFL’s San Francisco 49ers this past spring. Key Player: QB Shai Werts is now the clear offensive leader with Fields gone. He was named MVP of the Camelia Bowl after rushing for two touchdowns and leading the game-winning drive. He set a new school record for consecutive passes without an interception (118) and also proved he not only can run the option but also can throw the ball as he completed nearly 60% of his passes last year. The key will be how he performs with a number of new supporting cast this year.

Fearless Prediction: Georgia Southern has the ingredients to once again be one of the top teams in the Sun Belt and should challenge for the East Division title. Expect the Eagles to duplicate its results from last year but fall just short of the Sun Belt championship game but will get another solid bowl bid.