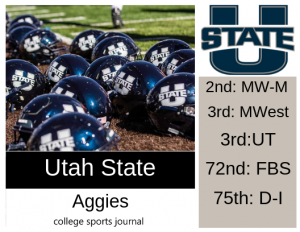 2018 In a Sentence: The Aggies entered their late season matchup against division rival Boise State last season on a 10-game win streak. However, Utah State lost and missed out on a chance to play in its first MWC Championship Game since 2013 but ended the season with a and easy win over North Texas in the New Mexico Bowl to finish 11-2 overall (7-1 MWC) in the end of of the Coach Matt Wells era, who departed for the Texas Tech head coaching job.

Biggest Shoes to Fill: RB Darwin Thompson earned second-team all-Mountain West honors as he carried the ball 153 times for 1,044 yards (6.8 yards per carry/80.3 yards per game) and 14 touchdowns to lead the team in all three categories, while adding 23 receptions for 351 yards (15.3 yards per reception) and two touchdowns. He was drafted in the sixth round of the NFL Draft by the Kansas City Chiefs.

Key Player: QB Jordan Love had a breakout sophomore season in throwing for 3,567 yards and 32 touchdowns, both single-school records. Love set three other single-season school records in 2018 with seven 300-yard passing games, 234 points responsible for and being named Mountain West Offensive Player of the Week five times. The key for Love is will be handling all the new teammates around him as nine starters were lost in total on the offense.

Fearless Prediction: Coach Gary Andersen returns to Logan where he coached the Aggies from 2009-12. His style is similar to Wells so the transition should be clean. The Aggies will have the strength of Love and an experienced defense to try to duplicate the 11 win season from last year. But with so much of its offense new, expect a small dip in the win total but still will be challenging for the MW Mountain Division title.