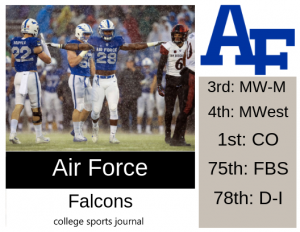 Biggest Shoes to Fill: OG Griffin Landrum helped anchor an offensive line that led the Falcons to the conference rushing title and No. 4 national ranking in rushing with a 283.5 average. Air Force rushed for 350-plus yards in each of the last three games. He was the only Falcon named to the All-MWC offensive team but is the only offensive lineman that will be missed this year.

Key Player: QB Donald Hammond III provided a spark in limited time for the Falcon triple option attack last year in replacing the now-graduated Arion Worthman. His key will be to not always keep the ball in the option game and give the ball off to the pitch men or the fullback postion, who is headlined by Cole Fagan. He will also need to stay healthy–something a Air Force quarterback has not done since 2012.

Fearless Prediction: The defense must improve as the offense did its part last year in scoring over 30 points per game on average. With seven starters back on defense, the group has the experience to do just that. The offense should continue and as has been done in the past by Coach Calhoun is to turn a losing team into a winning one–something he did 2014 after a 2-10 season to have 28 wins in the next three years. Expect this to happen and the Falcons to return to a bowl game.