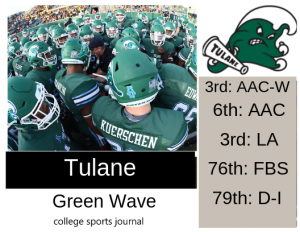 2018 In a Sentence: Tulane has turned a corner under coach Willie Fritz after the Green Wave finished off their first winning season in five years(7-6, 5-3 AAC) and the program’s first bowl win (over Louisiana in the Cure Bowl) in more than 16 years.

Biggest Shoes to Fill: CB Donnie Lewis, Jr. established himself as one of the AAC’s best cornerbacks as he led the conference and ranked third nationally in passes defended, averaging 1.7 per game at the end of the regular season. He also had a team-leading three interceptions and ranked fifth on the team in tackles with 54. He was selected in the seveth round of the NFL Draft by the Cleveland Browns.

Key Player: QB Justin McMillan stepped into the starting role midway through last season and led the team to a five wins in his six starts. He’ll be joined by graduate transfer WR Jalen McCleskey, a transfer from Oklahoma State, who along with returning WR Darnell Mooney, should give Tulane a complementary set of targets in the new offense under new offensive coordinator Will Hall. The change to Hall will give the Green Wave a more up tempo offense and how McMillian handles the change from a more run offense will be key for Tulane.

Fearless Prediction: Tulane looks to have back-to-back winning seasons for the first time since 1997-98. A change in offensive scheme and key player exits (just five starters back on offense) along with a challenging schedule that includes nonconference games at Auburn and a much improved Army team could make it hard to reach seven wins. But a six win regular season looks very realistic and another bowl bid.