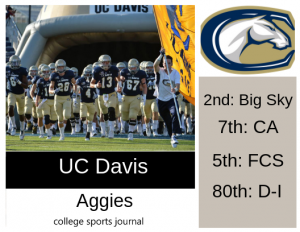 2018 In A Sentence: Dan Hawkins has brought the team from cellar to stellar. UC Davis is now a competitor not only in the Big Sky, but also in the FCS nationally last season – three losses on the season to a high-ranked Stanford team and two of those losses to Eastern Washington. The first meeting with EWU featured a 39 point demolition, but the second meeting was decided by only five points. If EWU and UC Davis had a chance to meet a third time in 2018, it may not have gone the Eagles way. An FBS win at San Jose State and stomping the Griz in Missoula were among the regular season high points. The first round of the playoffs also went well with a sturdy win over Northern Iowa.

Biggest Loss: Keelan Doss was a major threat at receiver and will be a necessary position to fill. With Doss graduated and at the Raiders facilities for the preseason play QB Jake Maier will have to find a new favorite target to get first downs. Doss had 1,334 receiving yards and 9 touchdowns last season. Jared Harrell will need to take up the slack as lead receiver and encourage the other receivers to rally.

Key Player: Jake Maier is a top FCS quarterback and will be in the running for FCS player of the year. The poise and precision of Maier is above average for the FCS level as he makes correct and accurate throws. A key piece to Dan Hawkins offense and a significant leader will help pose a threat deep into the playoffs. With the help of Ulonzo Gilliam at running back, another true freshman star, the running game will be strong despite the newfound target on his back. This could be the year of the sophomore running back as Gilliam, Davis (Weber), and Ifanse (Montana State) will all look to capitalize on their breakout seasons and make solid campaigns to be four year starting backs.

Fearless Prediction: UC Davis has a favorable schedule where they have both heavyweights and easier games. Playing the University of California and North Dakota State will likely be losses, but a good showing in those games will mean for a good season. Lehigh and San Diego will pose as good warm up games for the regular season as the wins will help install confidence and trust in the game plans. After those opponents in the non-conference part of the schedule the challenging teams will progressively get easier as the majority of the difficult games on the schedule will be at home. Montana, Weber State, and Montana State will all be home games this year which presents a unique opportunity to have home field advantages to the closer contests of the conference schedule. It will not be a challenge for the Aggies to take care of business with the rest of the conference besides a scrappy game in Grand Forks, ND as the Fighting Hawks do not go down easy. A realistic finish for the Aggies will be second place in the conference at either 10-2 or 9-3. The home conference games will be a challenge that UC Davis should be able to run through, but expecting a win over number three, four, and five is a bit greedy. If they were to lose a game, Montana State would be the team to bet on due to the versatility of their offense and lack of holes in their defense.