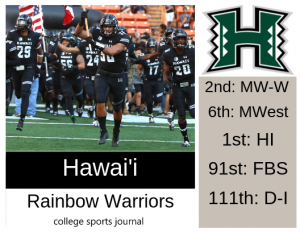 2018 in a Sentence: Last year started off very well at 6-1 before Hawaii dropped four in a row. The only loss in that seven-game stretch was a seven-point loss to Army. Disaster struck after the BYU game where the next three games were also lost by three or more scores. To the Rainbow Warriors credit, they bounced back with scrappy wins against UNLV and SDSU. In the FBS world, it would be all for not as Hawaii lost their bowl game 31-14 to Louisana Tech.

Biggest Shoes to Fill: John Ursua led the team with 1,343 yards and 16 touchdowns. Replacing that effort will be nearly impossible so the Rainbow Warriors will have to work as a team to rally around Cole McDonald. Hawaii led the Mountain West comfortably in passing and receiving last year. Despite the talent departure of last year, there is no reason why Hawaii cannot be a top-three passing attack in the conference. The rushing game was the third-worst in the Mountain West so until that improves look for McDonald to continue the air attack.

Key Player: Cole McDonald is a superior quarterback in an otherwise bland cohort with Brett Rypien now in the NFL. Look for the California native to continue turning heads as the passing attack becomes more balanced without John Ursua. McDonald had 3,875 yards, 36 touchdowns and 10 interceptions last year. This year look for even more success as Cole could break 4,000 yards this season if the receivers continue to grow. Also look for Kaimana Padello to finish his career with a strong senior year at defensive line. Padello quietly had 24 tackles, 13.5 TFL, 8.5 sacks and a forced fumble last year.

Fearless Prediction: The one thing that’s safe to predict about the Rainbow Warriors is that their offense is going to be fun to watch. Whether that translates into bowl eligibility or a Mountain West title depends on whether MacDonald and their run-and-shoot offense can navigate a tricky early schedule and win some tough games against Nevada and Boise State on the road.