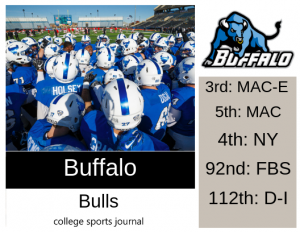 2018 in a Sentence: Buffalo went from 10 losses in 2016 to 10 wins in 2018–finishing 10-2 in the regular season (7-1 MAC) and winning the MAC East before falling to Northern Illinois in the MAC title game. The Bulls also lost to Troy in the Dollar General Bowl to finish on a two game losing streak.

Biggest Shoes to Fill: QB Tyree Jackson was named MAC Offensive Player of the Year last year after throwing for 3,131 yards and 28 touchdowns. He left the Bulls with a season left of eligibility but went undrafted in the NFL Draft. The Buffalo Bills, however, signed Jackson to a college free agent contract last spring.

Key Player: RB Jaret Patterson will be key this year with a new quarterback (likely junior Kyle Vantrease) playing for the Bulls. In the talented pass offense last year, Patterson still had a great freshman season with 1,013 yards on the ground and 14 touchdowns – averaging 5.5 yards per carry. He will need to become the star if UB wants to be nearly as productive on offense this year.

Fearless Prediction: The Bulls will have a drop off with Jackson not on the roster, as well as a number of key wide recievers. But with the strong run game and a fairly strong defense, this team will be just good enough to avoid an ugly drop-off. Ten wins is likely too much to ask but the Bulls should still get to the 7-8 win mark and make another bowl game.