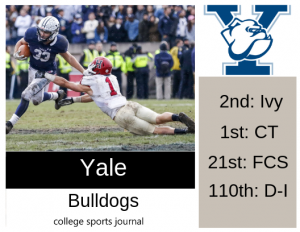 2018 In A Sentence: A wild 5-5 year saw Yale beat both Mercer of the SoCon and an FCS Playoff semifinalist in Maine, but lose a wild game in overtime to Holy Cross and an inexplicable 17-10 defeat to Columbia. A loss to Harvard in “The Game” to close the year left Eli fans wondering what could have been.

Biggest Shoes to Fill: Walter Camp played in New Haven for the Bulldogs more than 100 years ago, but the memories of Walter Camp, Carm Cozza, Albie Booth and countless other Eli legends will be brought up again and again for this team. That’s because it’s the 150th anniversary of college football this season, and over and over Yale’s past is going to be brought up. That legacy is going to be harder to fill than any one individual player.

Key Player: Yale is stacked, returning all their key skill players from last season and key parts of their defense. But individually, WR Reid Klubnik had a mammoth season last year with a school-record 1,143 receiving yards last year in only 10 games. He’ll pick up where he left off with QB Kurt Rawlings, a prospect that should terrify the rest of the Ivy League.

Fearless Prediction: Yale shouldn’t be able to sneak up on anyone anymore, but they need to get to a good start early to avoid the inconsistency that plagued them last year. Fortunately their schedule works to their advantage, with winnable games against Holy Cross, Cornell and Fordham before traveling to Richmond. If they can get out of their own way, some special games against Princeton and Yale to close out the year could be on offer.